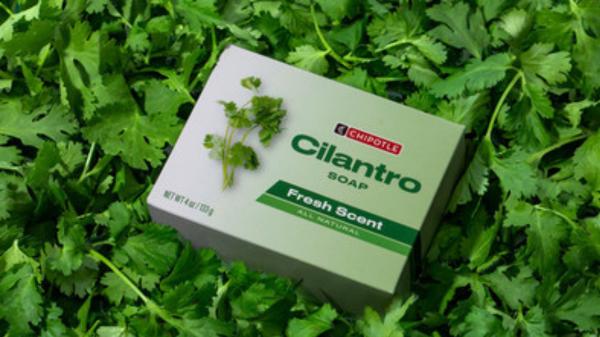 Roughly 4 to 14% of the population is genetically wired to experience a soapy flavor when they eat cilantro. Over the years, Chipotle has addressed fans’ love and disdain for cilantro in popular social media posts.

“If you had a party at your house, cilantro would show up in a sexy little dress, she would bring you a fabulous bottle of wine, and she would stay and help you clean up,” says culinary trend specialist Suzy Badaracco.

The widespread claim of cilantro haters—that it tastes like soap—has been turned into a marketing gimmick by Chipotle, which is offering a cilantro soap at $40+ a bar. (My shaving cream claims to have hemp in it, so why not?)

At this point, the lovers would appear to outnumber the haters. Cilantro has become the fresh herb of choice these days, reports The Guardian.

Production, and price, have risen accordingly. In 2019, the size of the California cilantro crop was given as 42,340 tons, with Monterey and Ventura counties as the main producers, and 6,063 acres devoted to it. The crop was valued at $47.9 million.

The cilantro trend has been heightened by the popularity of ethnic cuisines such as Mexican (guacamole, ceviche, salsa) and Vietnamese (pho). But its use goes much further: The New York Times has featured cilantro in recipes for Yemeni zhug, Goan chicken cafreal, and Moroccan saffron fish.

Some argue that basil was the gateway fresh herb for American cuisine. (We can set aside the perfunctory spring of parsley used to garnish entrees a couple of generations ago). I certainly remember my first encounter with it. It was the summer of 1978, which I was spending in Manhattan. A roommate in the trendy art world threw a dinner party. He went down to the now-defunct Fairway, bought an enormous quantity of basil, made pesto, and introduced us to all to what is still one of my favorite dishes.

Yet I must say that cilantro has never made it to par with basil on my list on personal preferences. My wife uses it regularly (almost always on shrimp), but I am more of the take-it-or-leave-it school.

Calling something a philosophical question, of course, means that it is never going to be answered.

But I do have one question in the wake of current concerns about food waste: how much of the cilantro bought is actually eaten? It doesn’t take too much to sprinkle a bit on shrimp or guacamole. And more than once I have reached into the refrigerator, hauled out a sad bunch of elderly cilantro (only a few springs of which were ever used), and consigned it to the perdition destined for all wilted greens.

I suppose there is always the option of that juicer that was high on our wedding registry list but which, thirteen years later, we have used maybe two or three times.