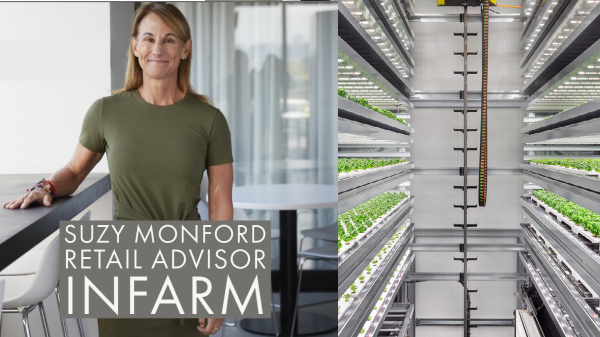 The company has a strong presence across Canada with Sobeys and is currently available in QFC (Kroger) stores in the Seattle region in the U.S.

In her role as Retail Advisor, Suzy will support the North American Executive team in further developing go-to-market strategies for the brand with regards to grocery clients, restaurants and e-commerce. She will assist the team in creating health- and wellness campaigns to increase public awareness about Infarm’s nutritious and tasty greens.

In addition, she will lend her expertise to contribute to innovation in packaging, and store merchandising. Leveraging her background in the industry, Suzy will help forge partnerships with new retail partners and with industry associations.

Suzy Monford is the former CEO of PCC Community Markets in Seattle, the largest community owned grocer in the U.S. Prior to this role, she held several executive roles in the Kroger Corporation including Group Vice President of e-commerce and Group Vice President of fresh and new markets. Suzy Monford created and implemented go-to-market strategies for new ecommerce markets across the U.S., led branding and marketing for all fresh departments as well as product development, digital merchandising and innovation growth strategies.

She holds a B.A. in economics from the University of Texas at Austin, is a Certified Holistic Health Coach under the Institute of Integrative Nutrition, and an internationally certified group exercise instructor. In 2009, she founded her own retail consultant company Food Sport International and has been advising retail and food companies in the U.S., Canada and Australia.

In Canada, Infarm announced extending the existing partnership with retail giant Sobeys this summer. As part of this deal, Infarm is constructing new Infarm Growing Centers – growth, production and distribution hubs with high-capacity vertical farms – at sites in Calgary, Halifax and Winnipeg; with Hamilton/Ontario (near Toronto) planned to host the location for the largest Infarm Growing Center in North America with a growing capacity of 37,000 square feet.

In combination with existing Infarm Growing Centers in Vancouver and Victoria/Vancouver Island, the agreement allows the company to increase production volume in Canada more than sevenfold. The deal came in response to the increasing demand by Sobeys, Safeway and Thrifty Food for fresh Infarm produce, and will supply more than 1000 stores in the retailer’s network alone by 2023.

In the future, consumers can expect to select from a range of new Infarm produce including tomatoes, strawberries, peppers, mushrooms, convenient cut salads and even potted plants which will be added to the current selection of herbs, salads, leafy greens and microgreens.

Over the last couple of years, Infarm grew tremendously and is currently present in 11 countries including the U.S. and Canada as well as in several markets in Europe and in Japan. Infarm harvests 1,000,000 plants monthly and growing, while using 95% less land than soil-based agriculture, 95% less water, significantly less transport and no chemical pesticides. To date as part of its operations, Infarm has saved more than 16,000,000 gallons of water and 600,000 square feet of land as it creates a new standard in agriculture.

Bio Suzy Monford
Suzy Monford is the former CEO of PCC Community Markets in Seattle, the largest community owned grocer in the U. S. Prior to being recruited to PCC, she was the Group Vice President of eCommerce for the Kroger Corporation. Monford was recruited to Kroger as president of QFC Grocery in Seattle and was later promoted to Group Vice President of Fresh, and again to GVP ecommerce New Markets. In her executive roles, Monford created and implemented go-to-market strategies for new ecommerce markets across the U. S., led branding and marketing for all fresh departments as well as product development, digital merchandising and innovation growth strategies. Prior to joining Kroger, Monford held CEO roles for Andronico’s Community Markets, the San Francisco Bay Area chain that was sold to Albertsons in early 2017, and FitBank.Works, the fitness platform she created and launched in 2015, earning her Top Woman in Retail tech by RIS. Earlier in her retail career, she was CEO of Cheers Inc., a healthy fast casual chain of restaurants in Texas.

Monford has twice been recruited to innovate retail and lead strategic change in Australia, first by Coles Supermarkets in 2009, and by Woolworths Supermarkets in 2013. She began her retail career spending 10 years as an executive for H-E-B Central Market and H-E-B Grocery Company in Texas. She has consulted for Morrison’s in the United Kingdom, and Loblaw in Canada. She is passionate about creating healthy communities, and while CEO of Cheers, she served on the executive boards of Directors for both the YMCA of Greater South Texas and the San Antonio Mayor’s Fitness Council. She holds a BA in economics from the University of Texas at Austin, is a Certified Holistic Health Coach under the Institute of Integrative Nutrition, and an internationally certified group exercise instructor. Monford is a highly-sought industry speaker and has delivered keynotes on behalf of FMI, RIS, Executive Women’s forum and others. Industry achievements and recognition include: 2019 “Top Woman in Grocery”, 2016 “Top Woman in Retail Tech”/RIS, 2016 “Top Woman in Grocery” and 2015 “Top 25 Technological Disruptors” by Super Market News. Monford has held Board positions with FMI, Seattle Food Lifeline, the Beecher’s Foundation/Sound Food Uprising, the California Grocer Association, and the YMCA of Greater San Antonio.

About Infarm
Infarm was founded in Berlin in 2013 by Osnat Michaeli and the brothers Erez and Guy Galonska. Passionate to become self-sufficient and eat better, they were growing their own food, enjoying all the flavor and nutrients, without the chemical pesticides and transport kilometers. With the aim to share the goodness of self-grown produce with everyone, they developed a smart modular farming system that allows distribution of vertical farms throughout the urban environment, growing fresh produce in practically any available space and fulfilling practically any market demand. Today, with cutting edge R&D, patented technologies and a leading multi-disciplinary team, Infarm is growing a worldwide farming network helping cities become self-sufficient in their food production, while significantly improving the safety, quality, and environmental footprint of our food.