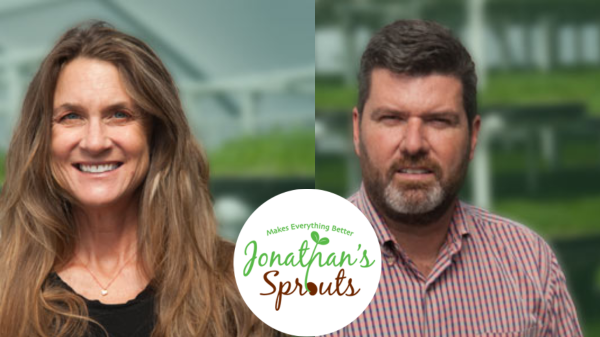 EAST FREETOWN, Mass., Aug. 17, 2021 /PRNewswire/ — Founded in 1976 by Bob and Barbara Sanderson, who have been credited as pioneers of the US commercial sprouting industry, have made their family-owned business succession plan for Jonathan Sprouts BB #:158441 public.

Niece, nephew, and longtime employees Liz Reilley and Rich Wolfe take the reins of the produce supplier as President & CEO and COO/CFO, respectively. The transfer of ownership for the Massachusetts-based corporation occurred on July 22.

The founders will remain on the Board of Directors and will continue to build opportunities for the sprout-growing community by refocusing on existing initiatives of seed sanitation, food safety and the improving of FDA regulations around the produce sector.

The Sandersons will also continue to serve on the board of the International Sprout Growers Association (ISGA) which they helped form in 1990. Jonathan Sprouts will remain in Rochester and East Freetown, Massachusetts and further announcements will detail plans for the future.

Liz Reilley worked in the family business during her summer breaks from college in the 80s, before developing her own career in Sales and Marketing. Rich, a seasoned finance, operations and tax specialist, has been guiding his own family businesses to optimal sustainability for over two decades. Together they bring complementary skills to plot a course of new growth for a well-founded business.

Liz Reilley served as the National Sales Manager for Guess Jeans and Danskin, provided PR for The Estee Lauder Companies and in her new role will oversee marketing, sales, production, and line extensions. Wolfe continues to oversee finance operations for a family manufacturing business in Chicago EMCO Gears and owns a Liberty Tax Franchise in Rhode Island.

As the COO/CFO of Jonathan Sprouts, Wolfe will oversee financial aspects of the company, human resources, administration, and operations.

“Our vision for the future is to continue to help foster awareness of the miraculous health benefits of sprouts and make sprouts accessible everywhere,” said Liz Reilley, President & CEO, Jonathan Sprouts. “While sprouts are still a niche category, we aspire to make the healthiest food alive a mainstream reality.”

Rich Wolfe, COO/CFO, Jonathan Sprouts, said: “Jonathan’s is now a mainstay in grocery and restaurants from Maine to North Carolina, and our next stage of growth will include helping more national brand retailers and Food Service companies to realize benefits of providing fresh sprouts to their customers.”

About: Jonathan Sprouts, Inc., founded in 1976, has become one of the largest and most venerable grower of green sprouts in the U.S., and can be found in major grocers in the Northeast including Stop and Shop, Shaws, Market Basket, Hannaford Bros., Price Chopper, Big Y, Giant, Food Lion and Giant Eagle, as well as major food service distributors such as Albert’s Organics, Sysco, Fresh Point, Costa, Matarazzo and Baldor.