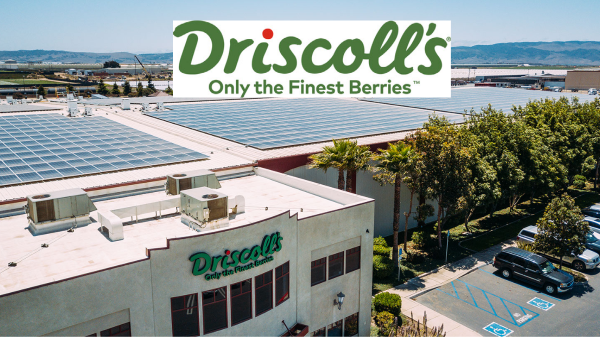 In addition to solar power, Driscoll’s has installed a battery storage system that can hold up to 700 kilowatt-hours. Together, both systems will allow the company to offset about 92% of the facility’s energy usage, generating a reduction in greenhouse gas emissions equivalent to removing more than 7,750 cars from the road over the course of 25 years.

The solar installation in Santa Maria is one of many, as Driscoll’s is in the early stages of pursuing clean and alternative energy sources for its owned and operated coolers across North America.

“The solar installation in Santa Maria is the first of several planned energy investments,” said J. Miles Reiter, Driscoll’s chairman and CEO. “We view this inaugural installation as a commitment to Santa Maria, our employees, and our local growers. It’s an investment in our future by having clean technology to support our local operations.”

In support of Driscoll’s transformation of its cooling facility to solar power, Driscoll’s employees, community members and local dignitaries, including Santa Maria Mayor Alice Patino, gathered at the facility for a ribbon cutting ceremony.

Patino commended Driscoll’s for elevating agriculture’s long-standing positive impact on the community by leading with clean and renewable energy. The event was a celebration of Driscoll’s renewable energy milestone and its future alternative energy investments.

As a community-based business, Driscoll’s is committed to growing in harmony with the environment and growing communities it depends on. The commitment challenges Driscoll’s to assess its dependency and impact on local resources, including the energy grid. Berries are a delicate and perishable fruit that must be kept in controlled temperatures as much as possible, which requires a significant amount of energy consumption. Driscoll’s decision to transform its Santa Maria facility to clean energy is a continuation of its 50-year commitment to the community, employees and local grower network.

Driscoll’s is the global market leader of fresh strawberries, blueberries, raspberries and blackberries. With more than 100 years of farming heritage, Driscoll’s is a pioneer of berry flavor innovation and the trusted consumer brand of Only the Finest Berries. With more than 900 independent growers around the world, Driscoll’s develops exclusive patented berry varieties using only traditional breeding methods that focus on growing great tasting berries. A dedicated team of agronomists, breeders, sensory analysts, plant pathologists and entomologists help grow baby seedlings that are then grown on local family farms. Driscoll’s now serves consumers year-round across North America, Australia, Europe and China in over twenty-two countries.