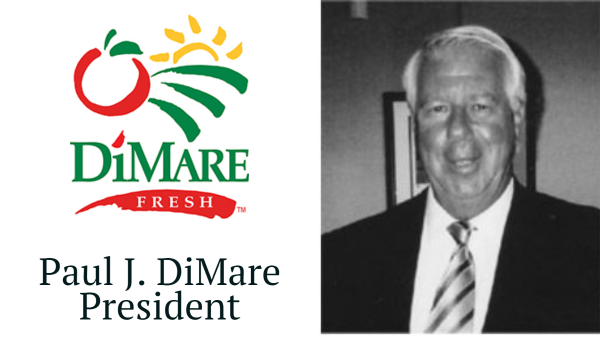 Paul J. DiMare, president of DiMare, Inc. BB #:139918 Boston, MA, has long been involved in charities and plans a new push to raise funds to fight what he calls “incurable diseases” such as Alzheimer’s disease, Parkinson’s disease, and ALS.

It’s also more personal than ever before because about six weeks ago, he says he was diagnosed with amyotrophic lateral sclerosis (ALS), an incurable neuromuscular illness.

“I have a foundation [The Paul J. DiMare Foundation] and I plan to give more to ALS,” he said.

DiMare also said he would push harder to get the government to spend money on research for such incurable diseases.

“I’ve given way tens of millions of dollars [to charities] but it’s nothing like what the federal government could do through NIH [National Institutes of Health],” he said.

“Incurable diseases should get billions. We saw how quickly [Covid] vaccines came, and it was because of all the money.”

DiMare said the federal government would be wiser spending money to find cures for diseases rather than treatments, which cost two to three times as much.

He said he’s still actively running the company from the Miami-area office, and three of his sons are actively involved in the company, which was founded by his father and two brothers in 1930 in Boston.

DiMare said he has some odd connections to ALS. His ex-wife died from the disease 11 years ago, and he said doctors told him the chances of spouses both getting ALS are about 1 in 100 million.

ALS is commonly referred to in the U.S. as “Lou Gehrig’s disease” after the Hall of Fame Yankee. This year Major League Baseball declared June 2 as Lou Gehrig Day, which was the 80th anniversary of Gehrig’s death from ALS. DiMare was born about six weeks before Gehrig’s death.

DiMare said even with the modern struggles of labor shortages, competition from imports, and lack of support for American businesses from the federal government, he’s proud of the DiMare companies and plans to keep working every day.

“I have no plans to cut back until I can’t speak anymore,” DiMare said.