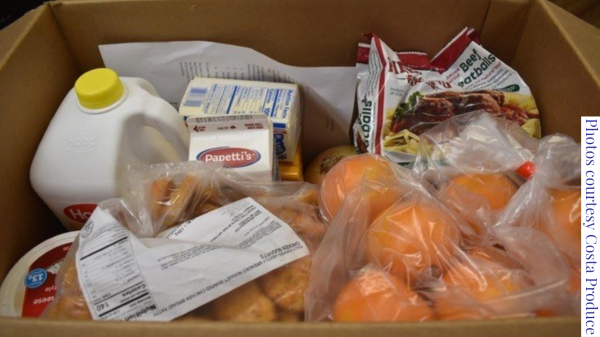 This combo food box was packed this fall at Costa Fruit & Produce, which has a Round 5 contract.

Many thought the USDA’s Farmers to Families Food Box program would expire at the end of the year, or at least with the Trump administration, but Round 5 is under way.

In analysis of the contracts (see chart) for Round 5, it’s clear USDA has prioritized low prices more than in previous rounds, as the average per box price is about $30 in the continental U.S.

On Jan. 26, a USDA spokesperson confirmed the price emphasis.

“In accordance with the original solicitation issued July 24, 2020, offers were evaluated on the basis of price (awards made to lowest price technically acceptable offer) that were determined to be responsible and responsive to all required terms and conditions,” the spokesperson said.

“I think cost has a lot to do with it,” said Mollie Van Lieu, Senior Director, Nutrition Policy for the United Fresh Produce Association BB #:145458.

The combination of lower price and the requirement that all the boxes be combo boxes of 1/3 fresh produce, dairy and pre-cooked meat, means that the produce options are more limited.

Van Lieu said she’s optimistic for the future of the food box program, although she expects it to be in some other form.

Democrats, which control the presidency, House, and Senate, tend to prefer hunger relief through the Supplemental Nutrition Assistance Program, which funds recipients directly, rather than programs like the food box that uses private companies and non-profits.

But Van Lieu said with the 15 percent SNAP funding increase approved in Congress at the end of the year, and the subsequent approval of extending the food box program, she thinks they both have a place in hunger relief in 2021.

“We’re still pushing for a produce-only box,” she said, like there were at the beginning of the program. “With the combo box, there is less produce. Produce-only boxes would be good for the industry, and non-profits tell us separate boxes would be easier for them and more flexible.”

Van Lieu also notes that there is no data that shows an increase in SNAP funding leads to corresponding boost to farm sales, while the food box program has.

“A produce-only option guarantees access to fresh produce and in quantities that [recipients] may not be able to afford,” she said.

USDA says the current contracts run through Feb. 28 with two options to extend the contracts for delivery through April 30, which, if fully extended, would expend the approved $1.5 billion.