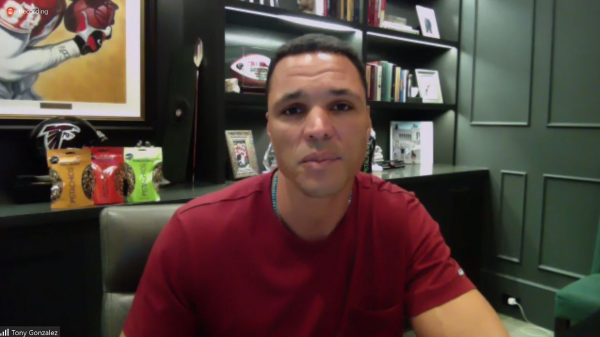 As part of his promotion with Wonderful Pistachios, BB #:355607 pro football hall of famer Tony Gonzalez credited his diet change to his career longevity, and said it’s happening to other athletes too.

The Wonderful Co. features Gonzalez as part of its “The Next Big Thing” campaign for its pistachio brand, which just surpassed $1 billion in annual sales.

In a Zoom call with media November 18, Gonzalez said 10 years into his NFL career, he made a major diet change, first to vegan, then mixing in lean meats and plant protein in, and he credits that for helping him play 17 seasons in the league.

He said he knew he had to take better care of his body, and diet was a huge part of that. He said it’s evident that modern NFL players, who are playing into their 40s, such as Drew Brees and Tom Brady, are also taking better care of their bodies, including diet.

Gonzalez’s 17 seasons were spent first with the Kansas City Chiefs and then the Atlanta Falcons. He was named to 14 Pro Bowls and holds the NFL records for most receiving yards and receptions by a tight end and was inducted to the Pro Football Hall of Fame in 2019.

He stars in six Wonderful Pistachio tv commercials, which poke fun at the history of football, while promoting the brand.

“Pistachios are healthy and make you feel full,” he said on the call. “They’re delicious too, and I don’t want to suffer with my diet.”

Gonzalez is now a football analysis on Fox network.