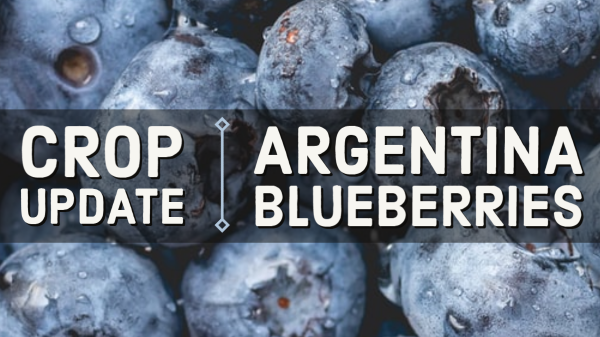 The blueberry harvest has begun in Argentina, conditioned by the particularities generated by COVD-19 at the international level.

In the Mesopotamian region, the beginning of this season is marked by the need to take biosecurity measures to take care not only of the fruit, but also of the workers, who are exposed to infection due to the activity they carry out, as reported by Mirador Provincial.

Along with the endorsement of Stamboulian Center, which specializes in infectious diseases, the Association of Blueberry Producers of Argentina’s Mesopotamia (APAMA) has developed a protocol for field and packaging tasks to protect its workers against possible infections. The president of APAMA, Alejandro Pannunzio, said the protocol established respiratory protection measures, as well as measures to transport the personnel, disinfect the transport units, and distribute the personnel in the fields.

“The priority this year is to take all the necessary precautions and more to ensure the biosecurity of both our field and packing personnel and the fruit itself. For months we began to develop the protocol together with our partners, we contacted the Stamboulian Center to certify our practices and we have obtained the endorsement of this protocol that is already in action,” explained Alejandro Pannunzio, president of APAMA.

And he detailed: “We established an order of how the way of working is. As we certify many international standards, many issues related to cleaning, we always keep them in mind with disinfection, but nothing is sufficient for this situation so that is why we turned to the doctor to validate the proposal we had. We were exchanging documents, they approved that protocol, we disseminated it among the partners and we shared it with the municipal authorities of the area to try to find something that is as safe as possible”.

Although it seems to be a year full of obstacles, the blueberry companies continue to produce and try to find a way to generate the conditions for the strong part of the harvest. According to Pannunzio, at this time, around mid-October, the fields accumulate between 25-30 percent of the expected production, depending on whether they have early or later varieties. The strongest part moment of the campaign is approaching, peaking in November, where all of the varieties are at the peak of their potential.

With the lack of workers also becoming another challenge, again due to the pandemic, majority of the harvest is being done by local labor due to the workers from the northern provinces not being able to make journey to fulfill their seasonal positions as normal.

“Every year we have workers from other provinces who come to the city to carry out blueberry harvesting and packing tasks; mainly from the north of Argentina, La Rioja, and Santiago del Estero. This year, given the current health situation, we couldn’t receive them,” Pannunzio said.

In addition to the travel impediment of workers from the northern provinces, many began to collect the Emergency Family Income (IFE), which conditions the workers, who prefer to continue to receive this benefit since they would lose it if they were to come to work.

On a positive note, the climate conditions of the year for the cultivation of blueberries are good, unlike the previous year.

“Now we are being able to take advantage of almost every harvest day, that’s very good,” explained Pannunzio.