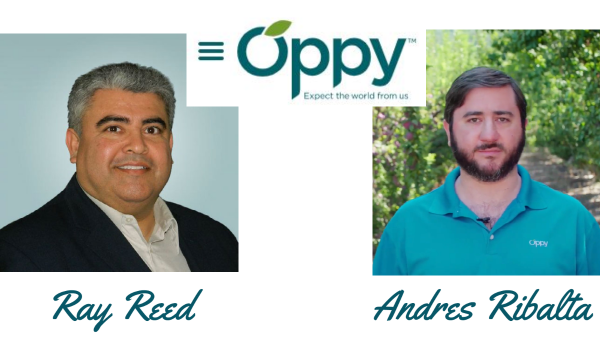 Oppy BB #:116424 focuses on expanding procurement and exports with two key promotions, Ray Reed and Andres Ribalta have been promoted thanks to their exceptional leadership and capabilities to support company growth.

As Oppy continues to expand its supply and international reach, Reed and Ribalta have been promoted to new positions in line with the company’s strategic growth journey.

“As Oppy continues to grow and strengthen its fundamental focus, it becomes imperative to ensure that the right people are in the right places within the organization.”

Effective October 1, Reed, who has served as Oppy’s general manager for Chile since the mid-2000s, will focus on expanding and strengthening sources of supply in his new position as director of global procurement, based in Oppy’s California offices. Reed will take on a leadership role in the crucial function of securing new partners, as well as maintaining and nurturing relations with Oppy’s extensive supply base.

Thanks to the international purview of his new position, Reed will help drive category growth for the leading grower, marketer and distributor of fresh produce, bringing his many years of expertise in grower relations to the forefront. His new role is collaborative at its core, and will involve working closely with Oppy’s grower relations teams in the U.S., Mexico, Chile, Peru and other partners in global markets.

“With extensive knowledge of Oppy’s Chilean-based business and of our grower relations team, Andres, who joined Oppy in 2011, is the ideal candidate to succeed Ray,” Oppy’s Vice President of South American Operations Eric Coty said. “We look forward to the enthusiasm that Andres will bring to this role, and the added momentum he will bring to the team as a whole.”

Growing, marketing and distributing fresh produce from around the globe for more than 160 years, Vancouver, BC-based Oppy discovers and delivers the best of the world’s harvest. With over 50 million boxes of fresh fruits and vegetables grown on every continent moving through its supply chain annually, Oppy offers popular favorites from avocados and berries to apples and oranges year-round, alongside innovative seasonal specialties. Over the years, Oppy has introduced North Americans to a number of items across its diverse produce range, including Granny Smith, JAZZ and Envy apples, as well as green and gold kiwifruit. Go to oppy.com to learn more.