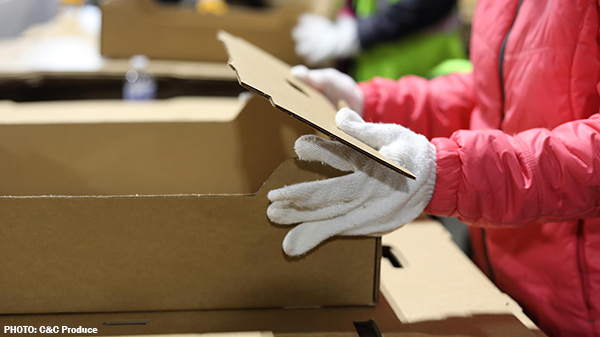 The USDA has given out about 50 Basic Ordering Agreements for companies to pack combo food boxes for the Farmers to Families Food Box Program starting Sept. 1.

Blue Book talked to two of them who said they’re ready to go.

USDA previously said the Sept. 1 to Oct. 31 Round 3 would proceed on time, but on August 28, USDA announced it would extend Round 2 box contracts until Sept.18 until Round 3 was ready to go.

Bob Proffer, CEO of Proffer Wholesale Produce, Inc., BB #:105572 Park Hills, MO, said the company has packed about 30,000 produce boxes a week for the program in the first two rounds.

Proffer Wholesale received a BOA for four regions, Southeast, Southwest, Midwest and Mountain Plains, which he said are all within 100 miles of the company in Southeast Missouri.

While the company didn’t have a contract for Round 3, Proffer said estimated the company could pack 100,000 combo boxes a week.

He said it may be more complicated than just the produce boxes, but Proffer has a 200,000 square-foot warehouse and 32 coolers that could handle different temperatures for fresh produce, dairy and meat.

Likewise, Nick Conforti, an owner of C&C Produce, Inc. BB #:149142, Kansas City, MO, said he has a BOA and is ready to pack combo boxes any time USDA gives the go ahead.

Conforti said the combo boxes will be more of a challenge than just fresh produce, but he understands USDA’s thinking behind the change.

“I can see why they’re doing it,” he said. “One box takes care of a family. It’s simpler for the (feeding) agency. And for the end customer, it’s a better program.”

“Produce companies overcome, adapt and get the job done,” Conforti said. “I’m so proud of our teammates in the company and the suppliers that we’ve been able to provide 75 million boxes (since the start of the food box program). It gives me goosebumps.”

C&C plans to pack staple produce items in each food box, which are bags of apples, oranges, potatoes and onions, and lettuce and squash.

He said August 28 that the company has been packing about 140,000 produce boxes a week and plans to continue that until the extension ends in three weeks.