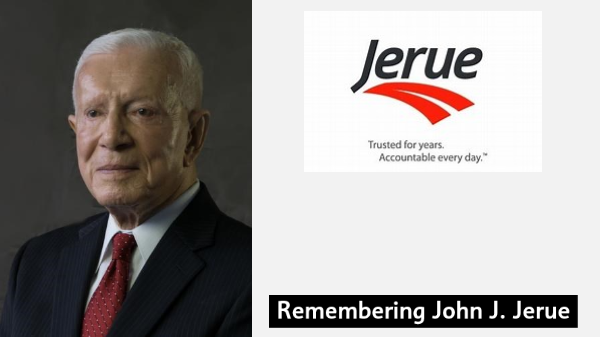 At the age of 16, Jerue began driving a 10-wheeler and only left trucking for three years to serve as a pilot in World War II. After the war, Jerue remained in the transportation business in Florida and eventually founded the Pompano Truck Terminal in 1962.

Considered a pioneer in Florida’s export shipping business, Jerue’s company became the inland transportation provider for export citrus to Asia when Florida first began shipping grapefruit to Japan. His vision saw this effort grow to large containerized shipments, and by 1997 Jerue had a fleet of more than 50 trucks and 230 trailers annually shipping 6.5 million boxes of citrus.

Later working alongside his son Jeff Jerue, John led a company that flourished into a nationwide provider of logistics services and solutions. Today, the company John J. Jerue Truck Broker, Inc. has one of the highest corporate ratings for trade practices according to Blue Book Services, the leading provider of credit and marketing information for the fresh fruit and vegetable industry.

Credited with astute business sense and generosity, he also had a great zeal for life. Jerue persisted in spite of an office fire that destroyed his office in 2005 and survived an alligator attack in 2012, while attempting to save his dog, Merlot, who remains alive with 3 legs.

Established in 1957, Jerue is a leading logistics provider with 36 offices located throughout North America. Jerue provides logistics solutions for thousands of customers, ranging from large national and international companies to smaller independent businesses and has a large network of carriers including thousands of fleets and independent owner operators who deliver products nationwide. www.jerue.com