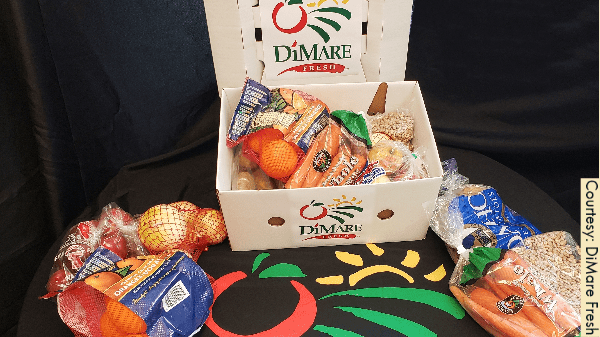 For rounds 1 and 2 of the USDA food box program, DiMare Fresh packed a fresh produce box like this. Round 3 will require a meat and dairy component also.

With the news that the next round of USDA’s Farmers to Families Food Box program will be more complicated, one current participant said it plans to bid again, nonetheless.

DiMare Fresh BB #:101247, a value-added produce and floral distribution company, is in the middle of a $54 million food box contract for the July-August segment.

Tony DiMare, an owner of the company, said July 31 that the company plans to submit a bid for round three, which will cover September 1 to October 31, in the next 10 days.

However, he acknowledged that the changes in the program will make the bid more difficult.

USDA’s changes in the program require everyone, regardless of whether the company has participated in the program before, to submit a new bid for the next round. Companies that pack food boxes will have to pack fruits and vegetables, dairy and meat in 30-40 pound boxes, not just one component.

Companies must also submit more details in their bids, such as names of subcontractors and non-profit partners.

He said the DiMare Fresh plans to submit a bid from its Texas location and find partners for the dairy and meat portions of the boxes.

“It seems more suited for broadliners, so you’ll see a streamlining of the program,” he said. “We’ve had some experience with these products from time to time.”

USDA said last week that the bid process is open, and there is no deadline for bid submissions, but once a region is filled with food box suppliers, USDA will no longer take bids.

DiMare said that means the sooner the company puts in its bid, the better.

He couldn’t say if his company would submit a bid as large as its current one, but he expects that its success and experience in the program will help its chances for the next round.

He also said his company has also shown the ability to deliver to smaller food banks and charities, as DiMare has supplied more than 300 organizations in all seven states of the Southwest region (Utah, Arizona, New Mexico, Texas, Oklahoma, Arkansas and Louisiana).

DiMare Fresh has been a big supporter of the food box program, DiMare said, because it helps American farmers and provides healthy food for people who are needy or newly unemployed.

“We value the responsibility to get food into the hands of people who need it,” he said.