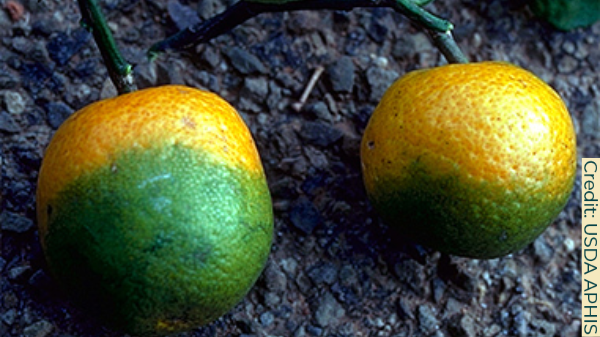 Scientists at the University of California-Riverside believe they are the first to find a successful treatment of the devastating citrus disease huanglongbing or greening disease.

The treatment that kills the HLB bacterium is a molecule that is an antimicrobial peptide, and it is found naturally in wild citrus relatives.

In the university news story, Jin explained that unlike antibiotic sprays, the peptide is stable even when used outdoors in high heat, easy to manufacture, and safe for humans.

“This peptide is found in the fruit of greening-tolerant Australian finger limes, which has been consumed for hundreds of years,” Jin said.

“It is much safer to use this natural plant product on agricultural crops than other synthetic chemicals.”

According to the story, the peptide only needs to be applied a few times per year, making it cost effective for growers. This peptide can also be developed into a vaccine-like solution to protect young, healthy plants from infection, as it is able to induce the plant’s natural immunity to the bacteria.

The peptide can be applied by injection or foliage spray, and it moves systemically through plants and remains stable, which makes the effect of the treatment stronger.

The university says the treatment will be further enhanced with proprietary injection technology made by Invaio Sciences. UCR has entered into an exclusive, worldwide license agreement with Invaio, ensuring that citrus growers have access to this new treatment.