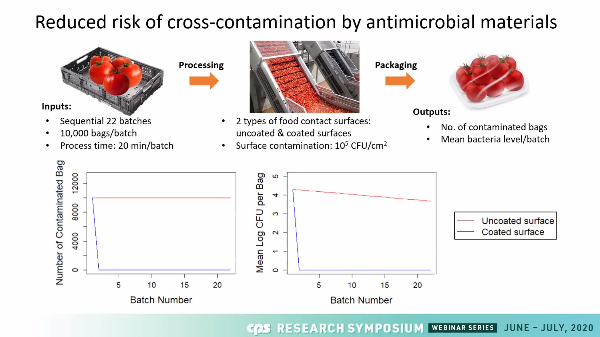 The attack on Listeria continues at the Center for Produce Safety’s virtual Research Symposium.

One report showed significant success with rechargeable antimicrobial plastics that can be used in plastic totes and bins. It would serve as a liner in existing reusable plastic containers and was studied by Nitin Nitin of University of California-Davis.

“The technology can be helpful for the supply chain from the point of harvest to the point that the consumer receives it,” he said on the June 30 webinar.

Nitin also said his study looked at costs, and he believes products could be made at a relatively low cost, so they could be used near term to improve sanitation on RPCs and hopefully, longer-term, be considered for designing RPCs.

Another study looked at the Listeria prevalence during storage on non-traditional salad items, which were fresh-cut broccoli stalks, fresh-cut Brussels sprouts, kale and beet greens.

Amanda Lathrop of California Polytechnic State University, San Luis Obispo, ran the study and found that the broccoli stalks behaved much like traditional salad items when it comes to bacteria growth and contamination, and the others had less contamination.

The purpose was to determine some of these levels in real-world conditions, she said.

An unexpected result was that she found fresh-cut produce that is subjected to physical abuse during storage and distribution showed no increased risk for bacteria.