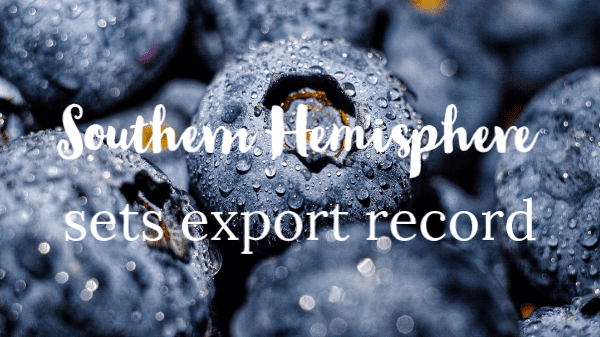 Southern hemisphere growers exported a record volume of blueberries for the 2019-20 season.

In fact, it was 18 percent higher than the previous record, according to iQunsulting, which is sponsored by ASOEX and Fedefruta and is supported by the Chilean Blueberry Committee, in the group’s recently released 2019/20 blueberry season report.

Among the figures noted on the report, according to by Simfruit, a Chilean news agency, one that stands out the most is the new record for the export of blueberries from the Southern Hemisphere, with 261,500 tons, reflecting an increase of 18 percent compared to the previous season.

Chile contributed 42 percent of these volumes and for the first time is not leading the region, dropping to second place with 109,400 tons exported, a slight drop of 2 percent compared to the previous season.

Although not part of the southern hemisphere, Mexico, Morocco, and a small part of Spain competes with Chile as their seasons take place during a period with the late volumes of Chile.

The Mexican season lasts all year, but it’s at its strongest in April, towards the end of the Chilean season and before the start of the local season in the U.S., its main destination.