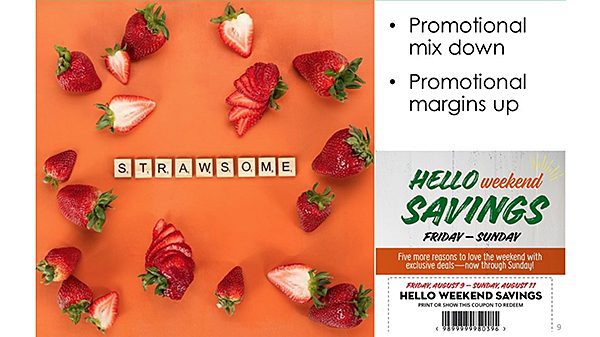 Rather than relying completely on being the lowest price promotion,. Sprouts plans to target ads on differentiated supply, like this local strawberry promotion.

While Sprouts Farmers Market BB #:168563 joined the list of retailers posting double-digit same-store sales amid the COVID-19 crisis, the Phoenix-based retailer’s first quarter earnings call was dominated by a look ahead at future growth.

Sprouts plans to reduce store footprints by 20% as it continues to build out its network, and three new distribution centers are in the works.

The move to optimize store size comes after the company launched a larger platform without a noticeable return on investment for the higher rents, officials said, during the company’s earnings call on May 5.

Produce will “always be fundamentally important to us,” Sinclair said. “And we won’t be compromising on that. If anything, we’ll be doing a little bit more in that space.”

The COVID-19 crisis gave Sprouts some insight into which categories could most effectively size down.

“Categories like deli will remain and will become more simplified,” he said. “If anything, COVID-19 gave us a glimpse into what this may look like. It highlighted that simplified pre-made meal items like salads sell and more complex costly salad bars may not be necessary in future models.”

Sprouts also is looking at delivering fresher product, and that means three new distribution centers, planned for Florida, Colorado and the Mid-Atlantic. Currently, some stores are as much as 500 miles from a DC. Sprouts would like to narrow that distance to 250 miles.

The distribution centers will be primarily for fresh produce.

“We plant o create a fast and fresh DC that aligns with our fresh partners in a more synergistic way,” Sinclair said. “This may eventually lead to vertical integration in the long term and we will take advantage of cross-docking activities in the near term.”

Sprouts also is looking at marketing and promotion strategy to attract and maintain new shoppers. Sinclair described a recent strawberry promotion as an example.

“In the past, this would have meant trying to be the lowest price in town on a broad promotion across all berries, and we would have sold a lot of them but with very little profit,” he said. “Fast forward to 2020, we focused on a single item, strawberries and the differentiation of the product being local.”

It was a success.

“The strawberry sales in this region comped north of 20%, with a margin that was up tremendously from last year,” he said. “This displays not only our ability to highlight fresh product, but how our scale is allowing us to partner with more local growers.”

Sprouts reported high same-store sales, as did many other retailers in the business, but not as astounding as others in grocery. That’s partly due to the company’s lower emphasis on paper products and other household goods.

“Our average basket was $51, nearly double the historic average,” said Susannah Livingston, vice president of investor relations and treasury. “And e-commerce sales represented 13% of our net sales in April.”

The company pivoted on grocery pickup, expanding the service to all 340 stores. While it is fulfilled by Instacart, shoppers are Sprouts employees, Sinclair said.

“For April, our e-commerce sales increased 950% from last year,” Sinclair said, thanks to an aggressive implementation of pick-up. Chain-wide expansion is expected in the next few weeks.