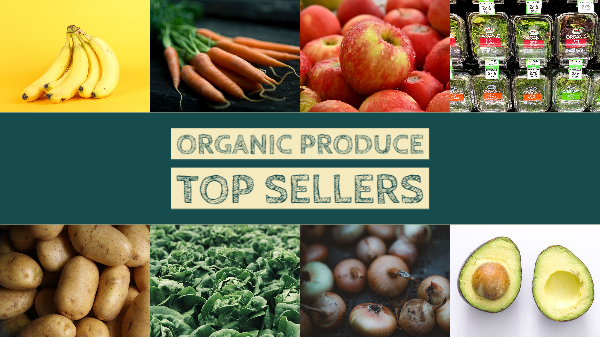 Like many parts of the grocery sector, the produce industry has mostly done well as a result of the coronavirus disruption. One study indicates that organic produce has benefited even more.

A first-quarter report on sales of organic produce was conducted on behalf of the Organic Produce Network BB #:338018 and Category Partners. The study broke out March 2020, the peak month for pantry stocking due to the virus, and found that in that month, sales volume for produce overall increased 22 percent over the previous March—an impressive growth. But organic volume increased still more, at 25.8 percent.

In dollar terms, total organic dollars increased 22.1 percent from the previous March, while conventional dollars were not far behind with a 20.7 percent increase.

Regionally, the Northeast and West showed the greatest dollar increase for organics in the first quarter: the figure for both was 10.3 percent. For the South, the increase in dollars was 5.9 percent; for the Midwest, 4.4 percent.

For increases in volume, the regions differed in rank. Here the South led, with a year-over-year increase of 13.3 percent. The Northeast was a close second, at 13.1 percent. For the West, the figure was 9.7 percent, while again the Midwest lagged, with a 5.1 percent increase.

The authors of the report suggest that the increase in organic sales might have been still greater except for tighter inventories and fewer selections for organic products. Hence if a particular organic commodity is out of stock, there may have been fewer organic second choices to resort to.

As for specific crops, “packaged salads are the single largest driver of organic dollars,” the report notes. “This category alone accounts for nearly 20 percent of all organic sales.” Year-over-year, this category increased by 4.5 percent in dollars.

Here are the top 10 organic commodities ranked by dollar value:

Price gaps are usually cited as the number one obstacle to switching from conventional to organics. Understandably, then, bananas, carrots, and apples, the most popular organic items (they account for 44 percent of all volume in the category), command among the smallest premiums over conventional: 36, 34, and 31 percent respectively. (Avocados are actually the lowest, with a mere 10 percent.) But price premiums aren’t the whole story.

Other commodities continued to command even higher premiums. As the above list indicates, blueberries rank among the top 10 for dollar value even though they cost an extra $2.34 per pound (54 percent over conventional). Organic strawberries, another item on the top ten for dollar value, sell for $2.92 (102 percent) more than their conventional counterparts.

The study doesn’t go into the reasons for the increased strength of the organic sector in the current climate. No doubt several factors apply. Irksome as it may be to conventional producers, organic fruits and vegetables are often perceived as safer. This certainly could be a factor in a time where practically everyone is preoccupied with safety.

Furthermore, organics are favored by higher-end shoppers, who have more disposable income. Some evidence suggests that these shoppers, who can no longer go to restaurants, are spending more on premium grocery items. If you’re not spending $100 once or twice a week for dinner out with the family, an extra $2.92 for a pound of strawberries probably doesn’t seem like a big deal.