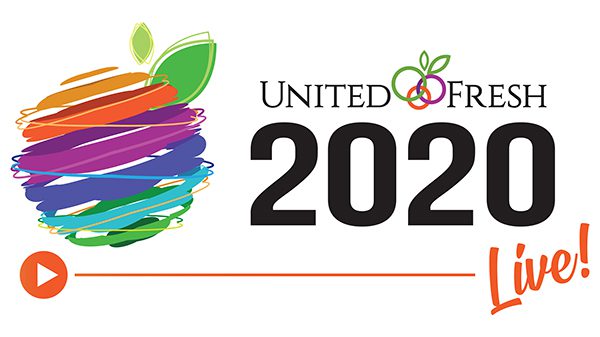 The past month has seen an unprecedented number of trade shows cancelled or postponed, with the last big event of the spring, United Fresh, still up in the air.

The Washington, D.C.-based organization revealed its plan to take the 2020 show, originally scheduled for June 16-19 in San Diego, virtual. United Fresh Live is now scheduled to take place the week of June 15.

“United Fresh is responding to a new world of social distancing and limited travel for nonessential services,” said Michael Muzyk, president of Baldor Specialty Foods, New York, chairman of United Fresh. “This experience will be the model for future associations and the industry as a whole.”

The event will host live virtual educational and keynote sessions, and a live virtual trade show experience. There will be no cost to attendees.

The new show format will allow live interactions between buyers and sellers on both appointment and an on-the-spot basis, similar to an in-person show, said Tom Stenzel, CEO of United Fresh BB #:145458.

“It’s going to be interesting to see how it plays out,” he said. “Everybody who is an attendee on the site will be able to be contacted. People are going to know you are using the site.”

Attendees can send messages to each other through the format and choose whether or not to respond.

Events like the Retail Produce Manager Awards and Produce Excellence in Foodservice Awards also will continue, with an enhanced digital format that allows greater attendance.

United Fresh plans to work with exhibitors to create online booths that offer company branding, deliver content, and connect with attendees on the site.

According to a letter sent to exhibitors by United Fresh announcing the changes, “All exhibitors will have a basic booth similar to a 10×10 on the show floor. For those exhibitors and sponsors who invest in a higher presence, there will be numerous marketing and sales enhancements to achieve your business goals.”

Demos of the experience are expected to be available in early April.

Exhibitor response so far has been positive, Muzyk said. Cost savings from travel and other ancillary expenses of attending a big show more than outweigh the cost of exhibiting virtually.

“New people that we’ve shown this to who weren’t having a booth before have signed up,” he said.

The future of trade shows?

United Fresh says the current COVID-19 crisis brought on an abrupt change for this year’s trade show, but it could usher in a new way of thinking for some industry events.

“A month ago when we started seeing shows cancelled we were pretty glum,” Stenzel said. “We were hanging our heads and thinking about what it would mean if we canceled, both financially and in lack of connection for our industry.”

“I do think we are early adopters,” Stenzel said. “We haven’t seen another big trade association or convention do this, and I think we’re going to in the future.”

Changing to a virtual show was still an investment, Stenzel said, and it’s not without risk. United Fresh is still negotiating financials with the San Diego convention center and hotels.

““Sure, we face some financial consequences from having fewer people than in San Diego,” he said. “We made the decision that we thought was right.”