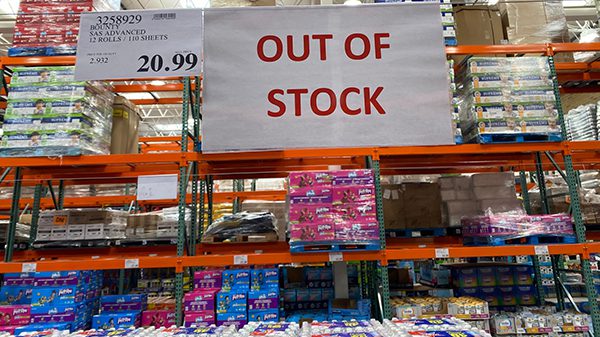 Large box items like toilet paper and paper towels were out of stock at the Cedar Park, TX, location of Costco Wholesale.

Fresh produce is largely unaffected by consumer panic buying, which has cleared out entire wholesale clubs of essentials like toilet paper and bleach.

Store-level employees are saying the crowds at stores are “like Thanksgiving every day,” but FMI – The Food Industry Association, expects the industry to catch up soon.

Retailers had an idea that stock-ups were going to start happening over the past few weeks but weren’t sure exactly what would tip consumers over the edge, said Doug Baker, vice president of industry relations for the Arlington, VA-based organization.

That happened over the weekend in this case, Baker said. Retailers are catching up with direct deliveries from manufacturers for those large-box items like cases of toilet paper and bottled water.

“The great thing is that we have a really resilient supply chain, and there’s no reason to ration,” he said.

The National Grocers Association likened the buying to an emergency response, saying in a statement:

“…while emergency situations can be fluid, grocers make contingency plans ahead of time, which involves coordination with their many vendors throughout the supply chain, especially those that provide items people tend to stock up on, such as milk, eggs, bread, and water.”

After the Natural Products Expo West was pressured into postponing its early March Expo West – after exhibitors started to arrive to set up — industry event organizers are monitoring the situation carefully.

South by Southwest, which runs March 13 to 22, has had big name attendees pull out, including Twitter, Facebook, Amazon, Amazon Studios, and TikTok.

The Produce Marketing Association, Newark, DE, issued a press release on March 3 saying it plans to move forward with SXSW and Center for Growing Talent events including the Emerging Leaders program on March 8 in Tucson and Fresh Connections: Retail on March 25 in Philadelphia.

“We are monitoring the developments on a daily basis in order to inform our decisions about events,” said Siobhan May, director of communications, in an email March 3. “At this time, and based on the current information, we are still planning to attend SXSW.”

United Fresh also is moving forward with events, and issued a member alert with linking to fresh produce industry resources for responding to coronavirus.

“Our hope is that our show will not be impacted, and we’re moving forward with planning in confidence that this will be the case,” said Mary Coppola Heslep, vice president of marketing and communications, in a March 3 email.