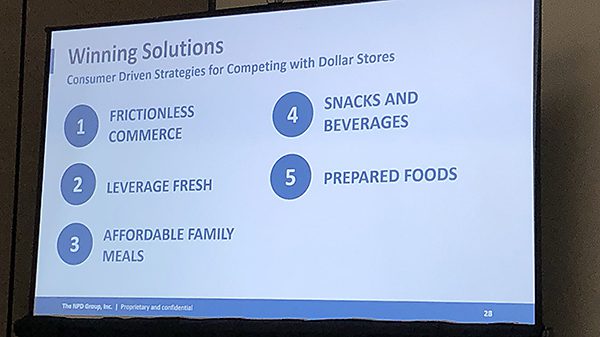 LAS VEGAS—Grocery store closures were the highest in 20 years in 2019—but that wasn’t true for one segment of retail. In 2019, dollar store formats grew 5 percent.

That would seem to make them an increasing competitor to the conventional retailer.

Fresh produce is even smaller, he said, but dollar stores are increasing their produce offerings.

He said retailer should offer competitive efforts against dollar stores, but it’s important to keep in mind who the dollar store customer is.

Dollar store customers tend to have children in the home and larger families index higher. Shoppers also index higher with lower income levels and rural versus urban, according to NPD research.

He said there are five key areas to compete with dollar stores:

“How are your prepared foods solving dollar store customers’ need for convenience?” he asked the audience of independent retail store operators.