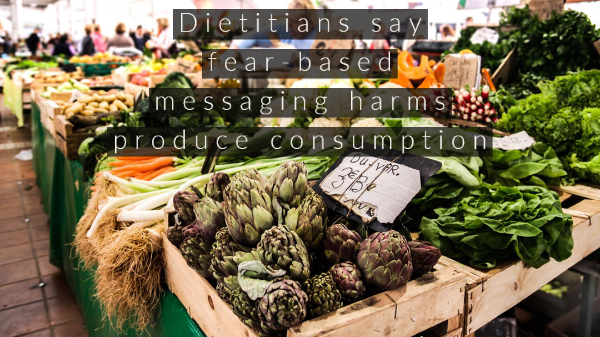 According to a new survey from the Alliance for Food and Farming (AFF), there is almost unanimous agreement among registered dietitians that it is important for consumers to know that conventionally grown produce is safe because not all consumers can afford to buy organic.

And, that inaccurate, fear-based messaging regarding pesticide residues has a negative impact on consumers because it causes misplaced concern about whether conventionally-grown fruits and vegetables are safe to eat.

The results of the RD survey are substantiated by peer reviewed research conducted in 2014 and 2016.

One of these studies found that misinformation about pesticide residues on fruits and vegetables resulted in low income consumers stating they would be less likely to purchase any produce – organic or conventionally grown.

Whatever the reason, it is clear that groups who try and invoke inaccurate safety fears should rethink this tactic for the benefit of consumers.
Despite decades of studies showing the overwhelming benefits of eating more fruits and vegetables and significant public health efforts to increase consumption, only one in 10 Americans eat enough each day.

And promoting safety fears regarding residues is simply creating a new (and needless) consumption barrier.

In fact, when the survey asked RDs to specifically identify the biggest food safety concerns among consumers in a follow-up, open-ended question, “pesticides/chemicals/GMOs” was the most frequently cited.

Since the science and government sampling data repeatedly show that residues “pose no food safety concern,” these survey responses underscore how misinformation may be impacting public health efforts to improve diets.

While other barriers are more difficult to overcome, the “fear barrier” could be easily tackled. All it would take is for certain groups to change tactics, stop posting and promoting scary and inaccurate content and stop calling healthy and safe fruits and vegetables “dirty.”

In fact, these groups could put their considerable resources (time and money) into joining public health efforts to promote healthy eating. Both actions could result in safety fears regarding residues eventually beginning to erode and a barrier might fade away.

The survey was conducted by the AFF to better understand the challenges faced by RDs and nutritionists to increase consumption of fruits and vegetables in the daily diets of their clients and consumers.

Learn more about the survey here.