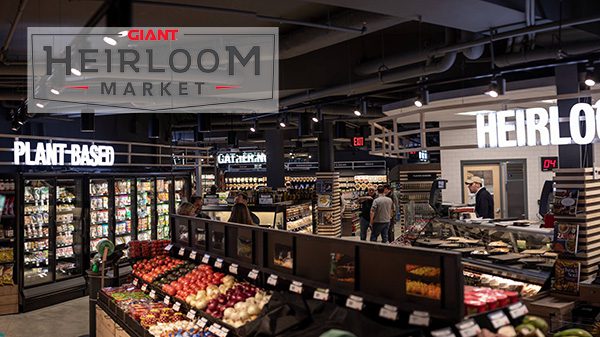 The omni-channel fulfillment center will be GIANT’s largest and support its ecommerce brand GIANT DIRECT, which has experienced double-digit growth since its launch last year.

The center will provide more capacity, better distribution and room to grow home delivery and in-store pick-up for online orders. GIANT will partner with Peapod Digital Labs to drive the innovation development for the facility.

Two new stores will be built across Pennsylvania. A fourth GIANT Heirloom Market and urban flagship store in Philadelphia have already been announced for completion this year. The 35 remodelled stores will help to simplify shopping with optimized product assortment, streamlined order pickup, improved merchandise displays and modernized décor.

2019 was a year of unprecedented growth for GIANT as it opened 17 new stores and launched two new brands. It was also named Retailer of the Year by Supermarket News.

BONUS: See a tour of a Giant Heirloom Market from a visit by Retail Editor Pamela Riemenschneider.