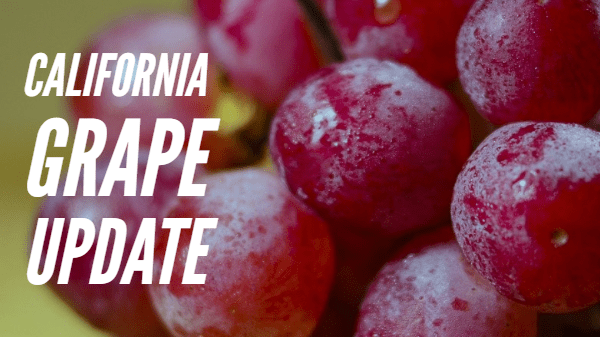 The California table grape crop is wrapping up earlier than last year with the Southern Hemisphere ready to supply buyers in December.

John Pandol, director for Pandol Bros., BB #:111977 Delano, CA, said the amount still to be harvested in California isn’t known, but he expects growers to continue to harvest grapes for about 10 to 20 more days or until the first freeze.

He said the California season will be about 5-10 percent lower than last year, but last year was a huge season.

Each retailer decides on their supply situation and their experience last year how long they will stay with California or switch to Peru or Chile, he said.

“Generally, the U.S. market will stay with California as long as they can reasonably do so,” Pandol said. “Canadian retailers are more of a United Nations approach, with multiple origins in the market both during and after the California season.”

Foodservice buying groups Markon BB #:123315 and Pro-Act BB #:141746are advising buyers that grape supplies will be stressed and prices higher for about a month.

Pro-Act wrote in its November 20 market report: “Due to the unfavorable weather patterns we experienced earlier in the year, the strength of the storage fruit is not as sturdy as we would have liked. We are seeing reports of dark color, dry stems, wet berries, and early decay. As a result of limited availability and in an effort to stretch the remaining storage crop, shippers are raising prices to slow movement. We expect prices to continue to climb as we look to transition into Peruvian fruit by early December. We expect the new import fruit to be priced higher to start and should level off by mid to late December as import production and arrivals improve.”

Markon advised buyers that prices will likely continue to rise through the end of November, and import fruit will be available next week.

As for imported grapes, Pandol said Chilean volume has been down from earlier seasons, and many buyers prefer Peruvian grapes when growers start to hit peak volumes.

“For January and February, there has been a preference to Peru over Chile, newer varieties from new vineyards versus traditional varieties from all kinds and ages of vineyards,” Pandol said.

“With redevelopment in the north of Chile, new varieties from new vineyards, many speculate Chile will take back some of its traditional space in the market. From March onwards we expect all Chile.”

Clarification: An earlier version of this story wasn’t clear about how long Pandol expects California to have grape supplies, which is through December.