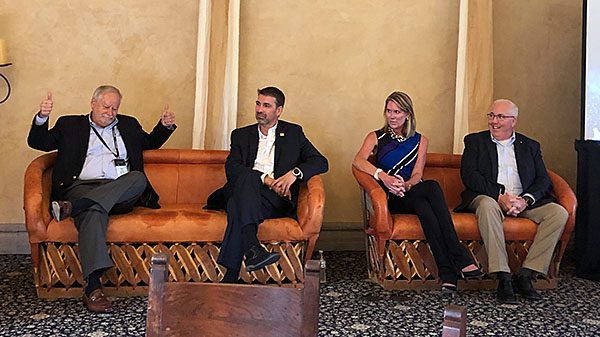 TUBAC, AZ – Free and fair trade is at the heart of the membership of the Produce Association of the Americas BB #:144354, and they should be optimistic it will continue with the U.S.-Mexico-Canada trade agreement.

At the annual meeting on the anniversary of its 75th year November 7, attendees heard from FPAA’s lobbyist that USMCA is close to coming up for a vote in the U.S. House of Representatives.

“We believe we have the votes to pass it,” said lobbyist Britton Clarke, who represents FPAA in Washington, DC.

She said House Speaker Nancy Pelosi, D-CA, has said she and many Democrats in the House support it, as does Florida Man through his trade negotiators and a majority of Republicans.

The only hiccup is some late pressure from U.S. labor groups to delay it. Just this week Politico reported that 12 leading labor groups have warning House members that the USMCA does not meet the needs of workers, and without changes, they will oppose the agreement.

Robert Martinez Jr., president of the International Association of Machinists & Aerospace Workers, said in a letter that lawmakers should not to “waste this rare opportunity” to fix issues in U.S. trade policy, adding: “The workers and communities that have suffered the disastrous consequences of NAFTA will not accept half measures.”

Clarke said agriculture needs to keep the pressure on Pelosi to introduce it before the end of the year.

Some Southeast Congress members have tried to get a seasonal adjustment in the deal, which would benefit growers in those states, but it appears to be left out.

“I think seasonality is 100 percent dead,” she said.

FPAA members who import Mexican fruits and vegetables strongly oppose seasonality exemptions, which would impose restrictions on imports and lead to trade retaliation.

United Fresh Produce Association president Tom Stenzel said he’s also optimistic it will pass soon. The United Fresh board also had to consider the seasonality provision, as many members are from Southeast states, but ultimately, he said the board voted against it.

“The United Fresh board has had a consistent message,” he said. “Seasonality in international trade agreements is bad policy.”

“We have to push to get it to the floor this year or it won’t happen. Next year will be tough,” Clarke said.

Canada and Mexico have already expressed support for USMCA, which would replace NAFTA.