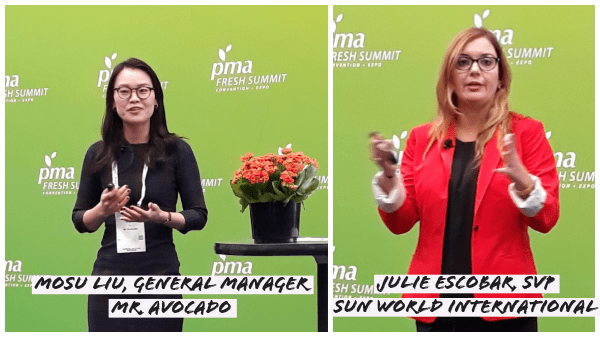 ANAHEIM, CA – The strengthening of the middle class in Southeast Asia has created an exceptional opportunity for purveyors of fresh fruit and vegetables.

Panelists at a PMA Fresh Summit workshop October 17 said rising urbanization in Indonesia and Thailand, as well as plenty of disposable income in Malaysia and Singapore, are just two of the reasons exporters should be paying attention to this market.

Julie Escobar, a senior vice president at Sun World International, LLC BB #:172413 with roles in renewal resources and global sales, noted that the average consumer in the region is from 30 to 33 years old and spends four hours a day online. Given Asia represents half of the world’s internet users, marketing any type of product must include a digital presence.

Mosu Liu, general manager of Mr. Avocado, also emphasized the size and importance of the Southeast Asian market—the fifth largest in the world after the United States, China, Japan, and Germany.

Of particular note are Laos, Cambodia, and Myanmar, the fastest growing consumer markets, with a population increase of 51 percent in the 20 to 54 age range. This segment has money, is interested in health and wellness, and is more than willing to spend it on fresh fruit and vegetables, she said.

Vietnam, the Philippines, and Thailand are the area’s leading fruit and vegetable exporters, accounting for 85 percent of Southeast Asia’s fresh produce exports.

Vietnam is the top supplier of dragon fruit; the Philippines and Cambodia both ship bananas; Thailand exports mangosteens, longan, green coconuts, and durian; while Malaysia is also capitalizing on skyrocketing demand for durian.

The vast majority of durian goes to China, where the odorous fruit is a popular ingredient in pizza, chicken soup, and rice cakes.

Gary Loh, founder of SunMoon Food Company and DiMuto, pointed out that in addition to rising income and spending power in the region, Singapore and Thailand also have the fastest growing retail grocery sector in Southeast Asia.

While opportunity abounds, Loh did stress the need for homogeneity and oversight. In response, he founded DiMuto, which uses IoT, blockchain, and AI to provide end-to-end visibility and food safety.