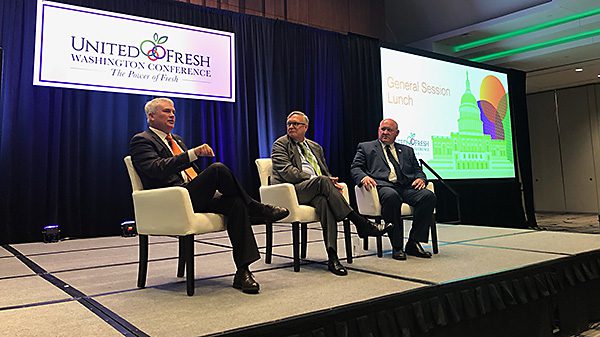 WASHINGTON, DC — Of the three issues the fresh produce industry hopes to persuade Congress members on this week in lobbying visits, nutrition looks like a winner.

Influential attendees at this week’s United Fresh BB #:145458 Washington Conference will find some tough meetings with some legislators on trade and immigration due to hard positions on political levels.

But the third, centering on fresh produce as part of nutrition policy, allows for some bipartisan support (see full list of asks below).

On school lunch options, Rep. James Comer, R-KY, said Republicans in the House generally support fresh produce in meals as long as the regulations of the Obama administration were relaxed, which they were.

“The last administration had their hearts in the right place, but the kids wouldn’t eat the food” that had tighter rules on nutrition, he said.

Rep. Jim McGovern, D-MA, said he’s a big supporter of nutrition as a part of solving hunger problems, and fresh produce has an important role to play in that.

He said he’s working with Rep. Rodney Davis, R-IL, on a bipartisan bill on healthy school breakfasts that ought to include fruits and vegetables.

McGovern also said many Democrats are looking to work with the health care community to include more recommendations on nutrition that would benefit the produce industry.

There could be push-back on some budget issues when it comes to increasing food benefits, but the produce industry should fight to keep its products in any system.

Here are the United Fresh requests that industry members are taking to hill visits with House Representatives and Senators September 17-18:

Protect children’s access to fresh produce in the Fresh Fruit and Vegetable Program (FFVP) by keeping it fresh only.

Require USDA and the Department of Education to enter into a Memorandum of Understanding to provide guidance for minimum seat time for consuming school meals and time of day for lunch.