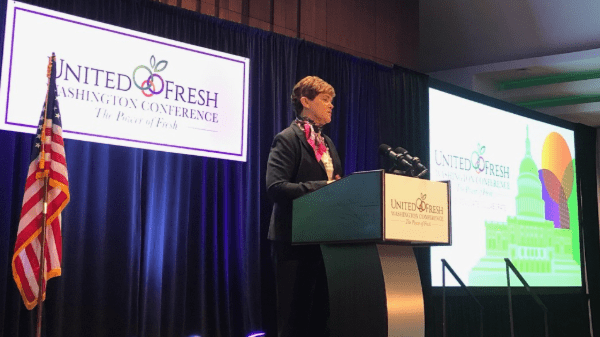 WASHINGTON, DC – As the produce industry begins its largest collective federal lobbying effort September 17-18 as part of the United Fresh Washington Conference, Washington insiders tell attendees that listening to Congress members is as important as telling your story.

The three biggest issues this week for the industry are:
-Immigration: The industry needs access to a legal, stable workforce.
-Nutrition policy: Fresh produce needs to continue to be included in government meal and snack programs, especially for young families and children.
-Trade: The industry wants help expanding international trade opportunities, including passage of the U.S.-Mexico-Canada trade agreement, which would replace NAFTA.

While it’s critical for produce representatives to tell how these issues affect their businesses, particularly when they’re inside the Congress members’ states or districts, it can’t be a one-way process.

The association shows each Congress member’s background and where they stand on the industry’s key issues, so attendees can appeal to those needs when they visit them in their Congressional offices.

“Find the right targets who can make a difference,” he said, and then appeal to how that affects his or her constituents.

Few may represent a rural district, but all their voters eat.

Mark Klompien, president and CEO of the United Potato Growers of America BB #:194030, said, “We need to get to the right target and then follow up, continue to deliver the message.”

Keynote speaker Krysta Harden, executive vice president of global environmental strategy for Dairy Management Inc., and former U.S. deputy secretary of agriculture in the Obama administration, said not only to listen to Congress members, but listen to consumers, not just to interject about their misperceptions on agriculture.

“Spend some time really listening to consumers,” she said. “Don’s just correct them but listen with an open mind. Learn why they think what they do.”

Lobbying, and changing minds, is more of a two-way process than most people realize.