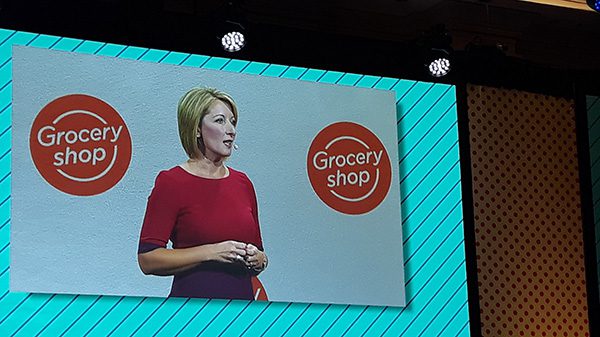 Stephanie Lundquist, executive vice president and president of food and beverage for Target, credited a renewed emphasis on fresh as playing a significant role in the national chain’s turnaround.

LAS VEGAS—Target’s fun and creativity got lost in transactions when it came to grocery, but now executives say they’re correcting those missteps at  Groceryshop in Las Vegas on Sept. 15.

The second edition of Groceryshop drew more than 3,000 attendees to learn what the future has in store for grocery.

Calling itself the “leading event for grocery & CPG innovation,” the four-day show is filled to the brim with workshops covering everything from in-store technology and creating a more personal experience for shoppers to the emergence of smaller format stores sweeping the country.

Representatives from GIANT Food Stores, Kroger Co., and Target all discussed the advent of smaller footprint stores, most of which are opening in large urban areas, including in and around college campuses.

Laurie Mahowald, vice president of real estate for Target Corp. BB #:166987, talked about the need for flexibility in size, from as small as 12,000 square feet, but with most smaller stores averaging 40,000 square feet (about a third of the usual Target).  Venue is key as well: from new construction to adapting existing buildings like former restaurants in mixed use developments.

Mahowald also emphasized the importance of produce, though her colleague, Stephanie Lundquist, executive vice president and president of food and beverage for Target, credited a renewed emphasis on fresh as playing a significant role in the national chain’s turnaround.

Last year, 2018, was one of Target’s best, due in part to retooling how it displays and sells food.  This was part of a $7 billion investment, which included “immersion trips” in and around stores, asking shoppers about what they liked—and more importantly—disliked about their local Target stores.

While Lundquist was candid about the retailer’s missteps, including a too-rapid, unfocused grocery expansion that resulted in a merely functional or transactional experience devoid of Target’s usual fun, creative flair, she says this has now been corrected by listening to what consumers want. Lundquist also said the company plans to 10,000 workers dedicated exclusively to food and beverage.

Next up for Target is the launch of the new Good & Gather brand, which will become the retailer’s largest private brand, with 2,000 new products by 2020. Lundquist says the Good & Gather brand is dedicated to putting “the joy” back into the shopping and consuming of food.  All products under the label will have no artificial flavors or sweeteners, no high-fructose corn syrup, and no synthetic colors.

Stay tuned – there’s much to come from Groceryshop 2019!