“Why did you stop shopping at Valli Produce?” I asked my wife a couple of days ago.

“Because the produce wasn’t very good,” she replied.

It was true. The large store, in Glendale Heights, IL, had always had a dismaying selection. Although the prices were good, there were a lot of fruits and vegetables that were very far from Fancy grade. It didn’t help that the front of the section had a large display of bargain items that were at or past the end of their shelf lives.

I don’t want to sneer at past-due products. I know that many people rely on them to stretch their food dollars. But the effect was far from inviting.

Valli Produce BB #:152038 came to mind when I read a recent study from ServiceChannel entitled “The Real Reasons Shoppers Aren’t Returning to Your Stores: The State of Brick & Mortar Retail Report.” It concluded, “70 percent of shoppers have had a recent negative experience in stores, from dirty bathrooms to disorganized shelves.”

The report focused on plain, simple dirtiness and messiness, contending, “Women control 60% of personal wealth in the US and account for 85% of all consumer purchases, and are much less tolerant of a mess: a majority of women say messiness would keep them from returning to a store; only 39% of men say the same.”

And of course, the richer customers are, the more likely they are to be bothered by these problems: “Consumers making more than $100k have higher expectations and the strongest reactions to poor in-store experiences.”

Despite the American penchant for technical gimmicks and the latest new thing, the report gives this advice to brick-and-mortar retailers: “Basics first. Bleeding edge technology second. Four out of five shoppers would rather have a clean store than one that prioritizes tech, and two-thirds of shoppers think retailers are too focused on tech and not on the basics.”

The moral of the report seems to be this: “Stores should be shoppable before they’re experiential,” meaning that clever apps aren’t going to help retailers much if their floors are filthy.

The report contains some omissions that were surprising to me. The most obvious one was personal interaction with employees: I would imagine that a good number of shoppers have decided never to tread a store’s doorstep again because of experience with snide or inattentive clerks. Another factor, as our experience with Valli Produce suggests, must be quality of merchandise. 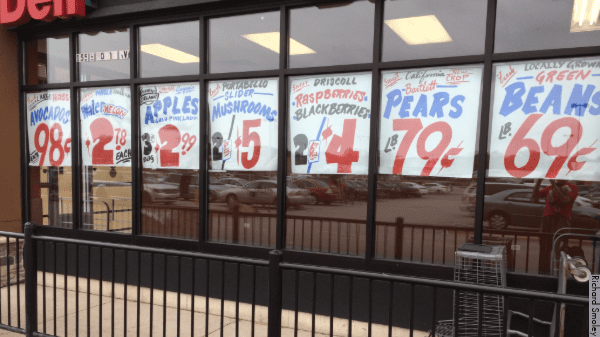 After reading this report, I decided to make my own fact-finding stop at Valli Produce, because someone had told me that it had undergone an upgrade. And it had. In my experience, it had never been dirty or disorganized, although the décor was somewhat shabby. This hadn’t changed: the walls were painted in the same bright yet forlorn shades of ochre, lime green, and salmon pink that evoked the Third World.

But the produce department had been revivified. The sacks of discounted apples that were close to rotten were no more to be seen. So were the displays of small and bruised fruits. The store, which caters to an ethnically diverse clientele (boxes of mangos are a big item), still had the same range of products, including nopales and methi leaves, but it all looked much better and brighter.

My wife will, of course, make her own decisions about where to shop, but I might find myself dropping into Valli Produce a bit more often, if only to browse at its enormous range of items from far-flung places. After all, who can resist a store with an aisle labeled “Russian, Lithuanian, Bulgarian.”