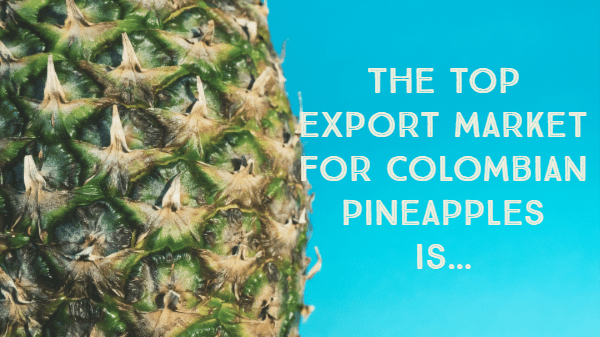 Apart from the avocado growth in Colombia, another fruit also stands out.

The pineapple continues growing in the local markets and exports for the last four years, per statistics provided to AgroNegociaos by the Colombian Fruit and Vegetable Association (Asohofrucol).

AgroNegociaos reports that from 2014 to 2018, pineapple production has increased at an annual rate of 12%, increasing from 652,759 tons to 1.05 million tons. Last year there were 32,735 hectares devoted to pineapple cultivation.

Alvaro Ernesto Palacio, general manager of Asohofrucol, stated to AgroNegociaos, “the departments that account for the most pineapple production is Satander (43%), followed by Valle del Cauca (14%), and Meta (12%); combined, these departments account for 69% of the total production.”

The Ministry of Agriculture and Commerce created the El Agro Exporta Alliance, a program executed by Colombia Productive, in order to develop the potential of this crop.

This program brought together 653 farmers in three departments that have a high pineapple production (Cauca, Valle del Cauca, and Casanare), with outstanding results. The goal being to increase yields of Golden Pineapple production and achieve the phytosanitary and quality requirements in order to enter new markets.