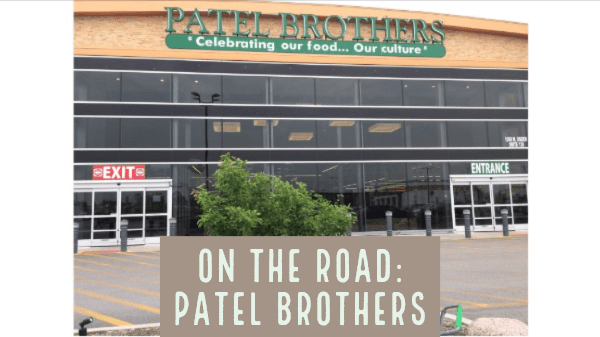 If you’re familiar with more than a couple, you’ve probably had some dealing with Indian markets.

These items were all on display during my recent visit to Patel Bros. supermarket in Naperville, IL. It’s one of a chain of 56 stores that cater to Indians (from India, that is) living in the United States. Patel Bros. is part of a growing trend toward ethnic supermarkets; until recently, ethnic specialty items were only sold in small shops.

In addition to a large and appealing stock of more familiar types of produce (as well as recognizable but still somewhat unusual items such as long beans and fresh peanuts), Patel Bros. carries all of these.

Although the produce is of course labeled, none of these items sport handy recipe suggestions. The shoppers here know these items and know what to do with them.

Other, more familiar types of produce are bought in larger quantities than in American-style supermarkets. While I was standing in line with my purchases, I had to wait. The women ahead of me were buying two boxes of mangos.

You know how supermarkets clerks open a box of eggs when checking them out to make sure none of them are broken? The clerk did something similar with the mangos. She cut the boxes open and inspected the fruit, each of which was wrapped in protective netting. Fortunately for me, she only inspected one or two per box. (At Valli Produce in Glendale Heights, IL, another market catering to ethnic purchasers, I have seen people buying mangos by the crate.)

Curry leaves, which were on offer at Patel Bros., are rarely seen outside of Indian markets. Technically, they are sweet neem leaves—neem being a plant favored not only in its fresh form but made into oils to be added to soap and shampoos. When used in cooking, the flavor is subtle—somewhat like cilantro (also available in large quantities at Patel Bros.), although less overwhelming.

Curry leaves, by the way, have nothing to do with curry powder, which is generally an admixture of ground coriander, cumin, turmeric, and chili powder. Other ingredients may be added. Every Indian household apparently has its own special mix of this common spice.

I was tempted to get young coconuts, remembering them from a trip to India, where you can buy green coconuts at the roadside. The vendor will pierce a hole in them and stick in a straw so you can drink the water. (This is the perfect earth-friendly packaging.)

But I shook a couple of the young coconuts at Patel Bros., and I didn’t hear much liquid in them, so I bought a bottle of coconut water instead.

Curiously, the market didn’t have the one produce item I was planning to buy: okra. Indian okra is slightly different from the standard American variety – it is longer and crisper. It also often looks better and fresher than in most U.S. supermarkets. (The Indians are better at cooking it too.) Why didn’t Patel Bros. have it? Obviously, it was a matter of supply, because there was a very large shelf labeled “okra,” but it was empty.

As for some of the items listed at the beginning of this article: goovar is a bean that is eaten as a vegetable. It is also a source of gum—aka guar gum. (Edible gum was another product I saw on Patel Bros. shelves.) Banana flowers have an exotic look, like large endives that are the color of red bananas. When very young or tender, they can be chopped into a salad. Otherwise you can cook them like greens such as cabbage: they cook quickly and lose a great deal of volume in the process.

Opo is a long, pale green squash. Its flavor is naturally mild, but it can turn bitter as it matures. Years ago, at a Filipino ice-cream shop in San Francisco, I had some opo ice cream, although I don’t have any clear recollection of what it tasted like.

This time I didn’t buy any produce at Patel Bros. (Nor did I make any purchases from the selection of cricket bats: the one time I have played cricket—for which India is famed—I didn’t take to it very well.) But next time I very well might try one or two of the Indian specialty items. It’ll take some Internet research to figure out how to cook them.