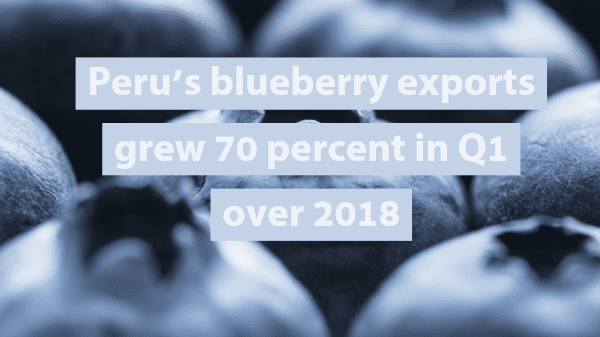 Peru’s fruit exports, which consist of fresh, frozen, canned, and juice and make up over 50 percent of agricultural shipment, are on the rise.

Sayuri Bayona, Deputy Foreign Trade Minister, told Andina that these shipments have grown 9.5 percent in the first quarter of this year compared to the same period in 2018. This increase being led by higher sales of blueberries (70 percent), grapes (19 percent), and pomegranates (27 percent).

Bayona credits this as being a result of an increased investment in agriculture, greater demand by European consumers, and aggressive promotional campaigns for Peruvian products abroad.

According to Bayona, Peru exported over $80 million of blueberries from January to March this year, becoming the most exported fruit in the first quarter.

While grapes, the leading agricultural export product in Peru, grew to $35 million during this period, up 19 percent from the same period last year. Pomegranates followed this trend, as shipments rose 27 percent to $36 million in the first three months of the year.