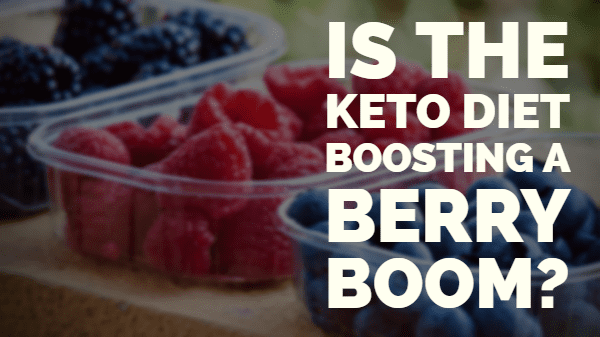 Can you believe it’s only been about two years since people went crazy for the keto diet?

Virtually unheard-of outside of very specific medical conditions prior to 2017 (well, except a very similar sounding low carb, high fat diet we all knew as Atkins in the late 1990s and early 2000s), the ketogenic diet started its upward climb on Google Trends in late 2016.

And since then, it’s become more popular than you might think, and that’s reflected in fruit sales, too.

Matt Lally, associate director for Chicago-based Nielsen, participated in a webinar expanding on the United Fresh Produce Association’s 2019 Q1 FreshFacts on Retail Report on May 7.

And the keto diet? Six percent of households in the U.S. say they’re following the keto diet. One of the core philosophies of keto is avoiding high sugar fruits, which Lally said correlates with lower fruit sales.

“We really do see these diets play out in terms of product performance,” he said.

Total fruit dollars and units were down 0.8% in the first quarter of 2019, continuing a trend over the past couple of years of flat and declining fruit sales.

“The exception is berries,” Lally said, which are allowed on the keto diet.

“Blueberries, raspberries, strawberries…there’s a pretty strong growth rate in fresh and frozen,” he said. “Overall there seems to be a connection between diet trends and consumer behavior, particularly the keto diet and fruit.”

While keto generally focuses on low carb and high fat, there are opportunities for fresh produce. Steve Lerch, Digital Consultant and former Google Executive, suggested produce companies track fads and trends like keto – and other emerging diets – and use social media and search engine optimization to make sure their product has a connection.

The Top 10 keto-friendly fruits are: