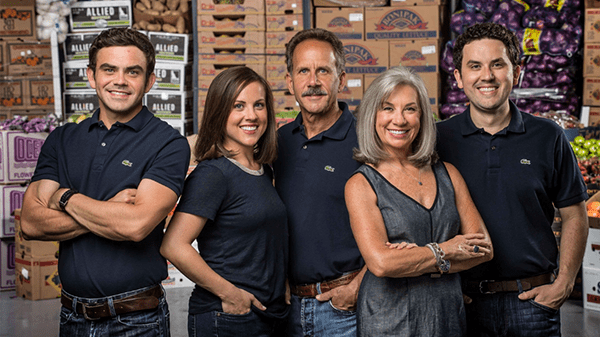 Phoenix, Arizona — When Willie and Lynn Itule launched their produce distribution business on Tax Day 1979 they started with an avocado green pick up, some help from friends and a dream of leaving a legacy. Forty years later, the husband and wife team lead an organization based at an 80,000 square foot state-of-the-art warehouse in West Phoenix that has grown to more than 100 employees including their three children: Billy, Andy, and Jessie.

“My dad would be proud. Looking around at the facility, the people and the family that are here — he’d be proud of all of us.” said Willie of his father — also Willie, who passed away in 1979. The senior Willie had a produce company of his own based in the historic “‘Duce” section of Phoenix, just east of what is now Chase Field, and it served as the inspiration for the business Willie and Lynn chose to pursue.

Willie and Lynn have put family at the center of their successful Arizona business over the decades. Today, each of their three children have scoped a role that suits their talents and has helped the business grow with Billy leading sales and business operations, Andy involved with fleet and warehouse management and Jessie managing finance. The mentality of family stretches beyond Willie and Lynn’s children, to employees and customers who have been with Willie Itule for nearly as long as the company has been around.

“Family is everything,” said Lynn. “We have been fortunate to build a business where our whole family can be involved. And that philosophy of commitment and caring, I think is evident in the way we run our team, work with so many of our partners, and of course is the way we want our clients to feel when they work with us.”

Lynn and Willie don’t see that attitude changing as they prepare for their fifth decade of operations, but other changes are on the table as their business evolves. The most significant sign of transformation happened in 2016 when Willie Itule Produce moved to their current warehouse in West Phoenix from their long-time location on Jackson Street.

“That warehouse was a very special place,” said Willie. “Over the years, we were able to grow from one building to about 50,000 square feet of total space. And in the mid-2000s we were at a point where we were actually able to purchase the one my dad owned.”

By 2015, the footprint of the Jackson Street warehouses could no longer scale with the growth of the business itself. In the years leading up to the produce company’s move, two trends were influencing growth: the partnership of buying groups brought added opportunity for corporate business, the restaurant landscape of Phoenix continued to thrive. With all these factors at play, Willie, Lynn, and their three kids decided it was time to move operations.

This new space — an 80,000 square foot facility near 43rd Avenue and Van Buren — opened up a radically new chapter for Willie Itule Produce, ushering in prospering relationships and a fresh take on technology.

In the last two years, the Willie Itule Produce team has overhauled their technology infrastructure at nearly every touchpoint in the business.

“The visibility we have in our business now is amazing,” said Lynn. “There’s not a single business operation that hasn’t increased in efficiency since we started this transformation. We’re able to offer more quality and service to our customers because of the tools we’ve implemented.”

The future of Willie Itule Produce is likely to focus as much on fresh thinking and digital innovation as it does on fresh produce.

“You know, as I reflect on this anniversary, I really think it’s been our ability to change that’s the secret to the success we’ve had,” said Willie. “Billy, Andy and Jessie have helped us see things in a new way when they officially joined the team, listening to our customers has kept us on our toes, and we’ve taken advantage of being able to learn from some great partners along the way. For us the mission is: keep evolving and keep doing it with family.”

To learn more about Willie Itule Produce, its partners and services visit, www.ituleproduce.com

Founded in 1979, Willie Itule Produce has a single focus: delivering the freshest produce to clients with the highest level of service. The 100-plus employee team serves clients of all kinds including restaurants, schools and hospitals across Arizona from their warehouse in Phoenix. Willie Itule Produce is committed to the communities it serves through philanthropic efforts, especially those promoting healthy eating for children and minimizing food waste. To learn more about Willie Itule Produce, visit ituleproduce.com