Fruits and vegetables aren’t affected in the latest school meals rule and will remain an important part of the program.

Unfortunately, the whole controversy is just another issue that’s been politicized in our culture. America’s school children deserve to be served healthy food in public schools, and these new rules should make it easier. 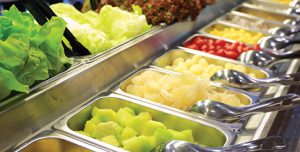 In 2012, under the Obama administration, the U.S. Department of Agriculture updated the national school lunch and breakfast programs to better reflect the latest government dietary guidelines.

These regulations increased the availability of fruits and vegetables, whole grains, fat-free milk, but also limited sodium and saturated fats.

Since then, the fruit and vegetable increases have been largely accepted and embraced, even if they’re not always fresh versions.

However, the whole grains, fat-free milk and sodium and fat requirements have been better in concept than reality, like many do-good government initiatives.

In announcing the changes this week, Agriculture Secretary Sonny Purdue said schools have too little flexibility under the last version, and that’s leading to them serving too many meals that kids won’t eat.

“We will continue to listen to schools, and make common-sense changes as needed, to ensure they can meet the needs of their students based on their real-world experience in local communities,” Perdue said in a prepared statement.

Many left-leaning health advocacy organizations have criticized the changes, as expected.

But the School Nutrition Association supports the change.

“This final rule strikes a healthy balance,” said SNA President Gay Anderson, in a release. “Schools will continue to meet strong nutrition standards but can prepare meals that appeal to a wide range of students.”

Anderson said school meal participation has declined by 2 million students since the new standards went into effect six years ago.

“The fruit and vegetable serving requirements for school meals were not part of the administration’s roll back of standards,” said Mollie Van Lieu, senior director of nutrition policy. “With our nation’s obesity and overweight rates still at troubling levels, we are relieved the administration recognized the importance of a wide variety of produce to student health, and their role in building healthy habits for life.”

While school meals fell into the political gravity field, once again, fresh fruits and vegetables remain above, free to be embraced by everyone.