The turnip, a member of the Brassicaceae family related to cabbage and cauliflower, is experiencing a renaissance of demand, with new generations appreciating the edibility of both its leaves (or greens) and root.

Most turnips grown for fresh consumption produce small root globes, while larger types are planted and harvested for livestock feed.

The rutabaga, also a member of the Brassicacae family, is generally considered a cross between wild cabbage and a turnip, but some believe it evolved on its own through cultivation just a few hundred years ago.

Turnips have been cultivated for millennia and were reportedly grown in India as early as the fifteenth century, with many believing they were domesticated in Asia. Rutabagas may have originated in Russia or Scandinavia in the late Middle Ages.

Today, both of these cool season, hardy crops are grown worldwide, though the United States, Europe, United Kingdom, and Canada have substantial commercial production. 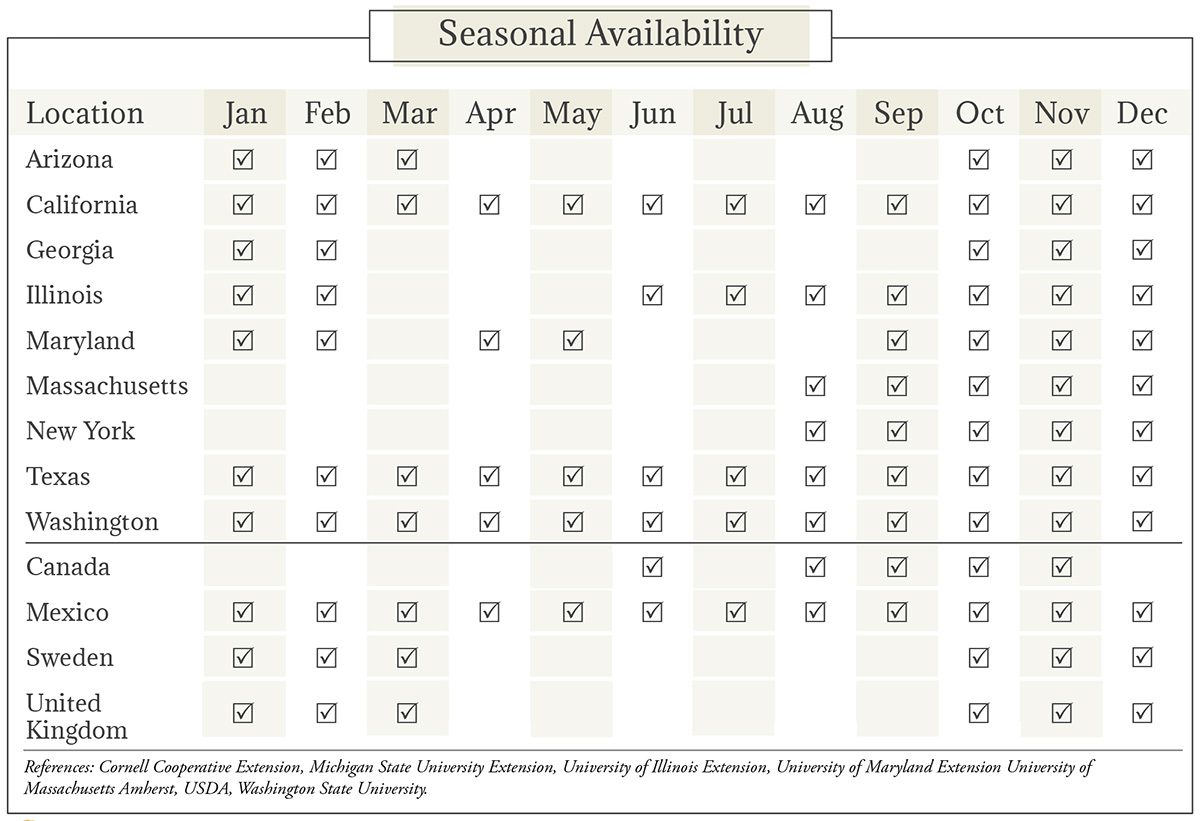 Types & Varieties
While both the fleshy root and leaves can be eaten, rutabaga roots are very popular with consumers, while turnip greens are climbing in demand.

Other varieties such as Alamo, All Top, Appin, Seven Top, Shogoin, and Topper are harvested for their greens.

The rutabaga’s globe-shaped root is more elongated than a turnip and many varieties showcase a purple crown or reddish-purple shoulders.

CULTIVATION
As a cool season crop, turnips and rutabagas thrive in temperatures from 50 to 65°F. Plants prefer fertile, loamy, well-drained soil and can grow in spring or fall, depending on region.

Both vegetables can be affected by temperature shifts: if too warm, root flavor can become too strong, while exposure to overly cool temperatures can cause bolting.

When it comes to watering, adequate moisture ensures better quality, but both turnips and rutabagas are predominantly resistant to drought.

Pests & Diseases
Cabbage maggots are a major threat to all cruciferous crops, including turnips and rutabagas. After adults lay eggs in the spring, maggots begin to hatch and then burrow into roots.

Each year, three generations are born. As they feed, larvae decimate the root system. Signs of damage include plant wilting, yellowing of outer leaves, and eventually plant collapse.

Black rot, one of the most destructive bacterial diseases to cruciferous crops, can lead to major losses. It can affect seeds and seedlings, as well as more mature plants. Bacteria can be carried by air and water throughout the season, resulting in a yellow triangle on leaf edges, eventually turning veins black. The disease can also spread to the root system.

Clubroot is a soil disease causing swelling of the roots. The fungus, which can live in the acidic soil for years, will eventually kill the plant.

Scab, a soilborne disease, causes round lesions with a recessed center on roots. Most common in dry conditions, irrigation can significantly diminish the disease.

Fusarium wilt is a seed- and soilborne fungus common in too-warm soil and can cause discoloration in the crown and leaves, wilting, and eventual death of the plant.

Storage & Packaging
After harvest, soil should be removed carefully (to prevent damage), though practices vary (topping vs. bunching) depending on whether the roots, greens, or both are meant for the fresh market or processing.

Roots are generally placed in storage, usually in bulk piles or boxes. Piles should not be too deep and allow for good air circulation.

A temperature of 32 to 35°F and 90 to 95% relative humidity is ideal; turnips and rutabagas can last for up to 6 months in these conditions.

Chilling sweetens the flavor of rutabagas. Rutabagas are often waxed before sale; once roots are dry after washing, they can be coated with a paraffin wax. Too much wax will cause internal breakdown.

GRADES & GOOD ARRIVAL
Both turnips and rutabagas are divided into U.S. No. 1 and U.S. No. 2 grades. Each includes size and color specifications and tolerances for root defects and damage.

High-quality roots will be well-trimmed, fairly smooth, fairly clean, well-shaped, and free from damage or decay. Condition defects can include growth cracks, cuts, discoloration, dry rot, and signs of disease.