Almonds, Brazil nuts, cashews, hazelnuts, macadamia nuts, pecans, pistachios, and walnuts are all tree nuts. Though many consumers lump all nuts into one category, peanuts are not considered tree nuts, as they are a legume, and cashews are actually part of a drupe. While chestnuts are tree nuts, this commodity is covered in a separate Know Your Commodity profile.

Grown on only a small percentage of the nation’s agricultural cropland, the United States still harvests a vast amount of tree nuts each year. Georgia, New Mexico, and Texas dominate in pecan production while California continues to produce the lion’s share of almonds, pistachios, and walnuts. Tree nuts are also among California’s top exports.

California is the only U.S. state that grows almonds commercially, and most production is exported across the globe. There are several varieties of almonds including Mission, Nonpareil, Price, Butte, and Padre.

As the nut forms on the tree, it is enclosed in a sturdy hull and inner hard shell. Although almonds are sometimes sold in-shell, they are more often shelled during processing. The product may be further processed through blanching, dry roasting, chopping, or converted into a paste called marzipan (a confection made from honey, sugar, and almond meal).

Brazil nuts grow on the Bertholletia excelsa tree native to the South American Amazon forest. Growing up to 160 feet high with a trunk diameter of 3 to 6 feet wide, the Brazil nut is the largest tree in the Amazon forest. Most Brazil nuts are produced in Bolivia, followed by Peru and Brazil.

Generally eaten raw, Brazil nuts are a good source of protein, magnesium, and Vitamin E, and rich in selenium, a powerful antioxidant. However, people who regularly eat too many Brazil nuts can suffer from selenium poisoning. For this reason, it is recommended consumers eat just a few nuts per day.

Cashews (anacardium occidentale) are the fruit of tropical evergreen trees. The curve-shaped “nut” sprouts from the plant’s drupe, referred to as the cashew apple.

Native to Brazil, cashews were originally exported by Portuguese missionaries to East Africa and India during the sixteenth century. Today, India and Vietnam lead the world in cashew production.

Although the cashew apple is used in beverages, jams, and jellies, the seed is the most consumed element of the plant, often eaten on its own or processed into cashew butter.

Like all tree nuts, cashews are nutrient dense foods with ample protein but also fat. Because cashews are in the same family as poison ivy, the raw nut shells and the resin they excrete can cause dermatitis.

Also called filberts, hazelnuts originated from the Black Sea and Mediterranean regions in Turkey, Italy, and Spain. This area is still the center of production, with Turkey producing more than half of the world’s hazelnuts. The United States ranks third in production after Turkey and Italy.

Although a small portion of hazelnuts are grown in Washington State, Oregon is responsible for nearly all U.S. production. The only tree nut produced commercially in Oregon, hazelnuts are an important crop and frequently featured in confections such as chocolate truffles, cookies, pralines, and chocolate hazelnut spreads.

A popular part of the snack food industry, hazelnuts are sold whole, diced, ground, unshelled, or as a paste or oil.

Macadamia nuts originated in Australia in the mid-1800s and were later introduced to Hawaii in 1881. Though found in tropical and subtropical countries across the world, the round nuts are only commercially produced in Australia and Hawaii.

Two primary species, Macadamia integrifolia and Macadamia tetraphylla, are both native to Australia. Also known as the “smooth shell” species, the integrifolia is grown in Hawaii and produces a round, small nut with high oil content—a characteristic that makes it better for roasting and salting.

Tetraphylla, the “rough shelled” species, is less tolerant of extreme temperatures but produces a sweeter tasting nut. Considered a gourmet nut, whole macadamias are sold salted in glass jars or used in cookies and candies.

Native to North America, the pecan tree belongs to the same family as English and black walnuts and hickory nuts. The pecan tree, which originated in the Mississippi flood plain, was a prominent food source for Native Americans long before European settlers arrived.

Pecans rank third in consumption behind almonds and English walnuts, and are a top export. They are sold in-shell or shelled, and grade standards are tied to this designation.

Nuts in the shell are graded by size or kernel color, while shelled nut grades are determined by size in halves or pieces.

It is believed that pistachios originated in the Middle East, where the trees have grown for thousands of years. The green nuts eventually reached Greece, Italy, and Spain, then the United States in the 1880s where they grew in popularity.

California is responsible for the bulk of U.S. production, though Arizona, New Mexico, Texas, and Utah also grow in lesser quantities.

Most are sold in the shell, primarily roasted, salted, and sold as a snack food. Some are also used in ice cream, confections, baked goods, and dressings. A single ounce serving includes 6 grams of protein, 3 grams of fiber, and 286 milligrams of potassium.

The oldest known tree food, walnuts date back to 7000 BC and are believed to have originated in ancient Persia. Although walnut trees were first cultivated in California in the 1700s, commercial production did not begin until 1867 and went on to become the nation’s top walnut-producing state.

There are two major varieties grown in the United States: the English walnut and the black walnut. Often called the American walnut, the black walnut tree is native to North America and grows wild across the central and eastern parts of the country.

California black walnuts have a rich, bold flavor and thick, hard-to-crack shells. Because English walnuts feature a milder taste and thinner shells, the latter variety has much broader appeal. A newer variety, the Livermore, is a unique red walnut introduced to the commercial market by the University of California, Davis in 2012. Demand for this mellow, creamy-tasting walnut continues to climb. 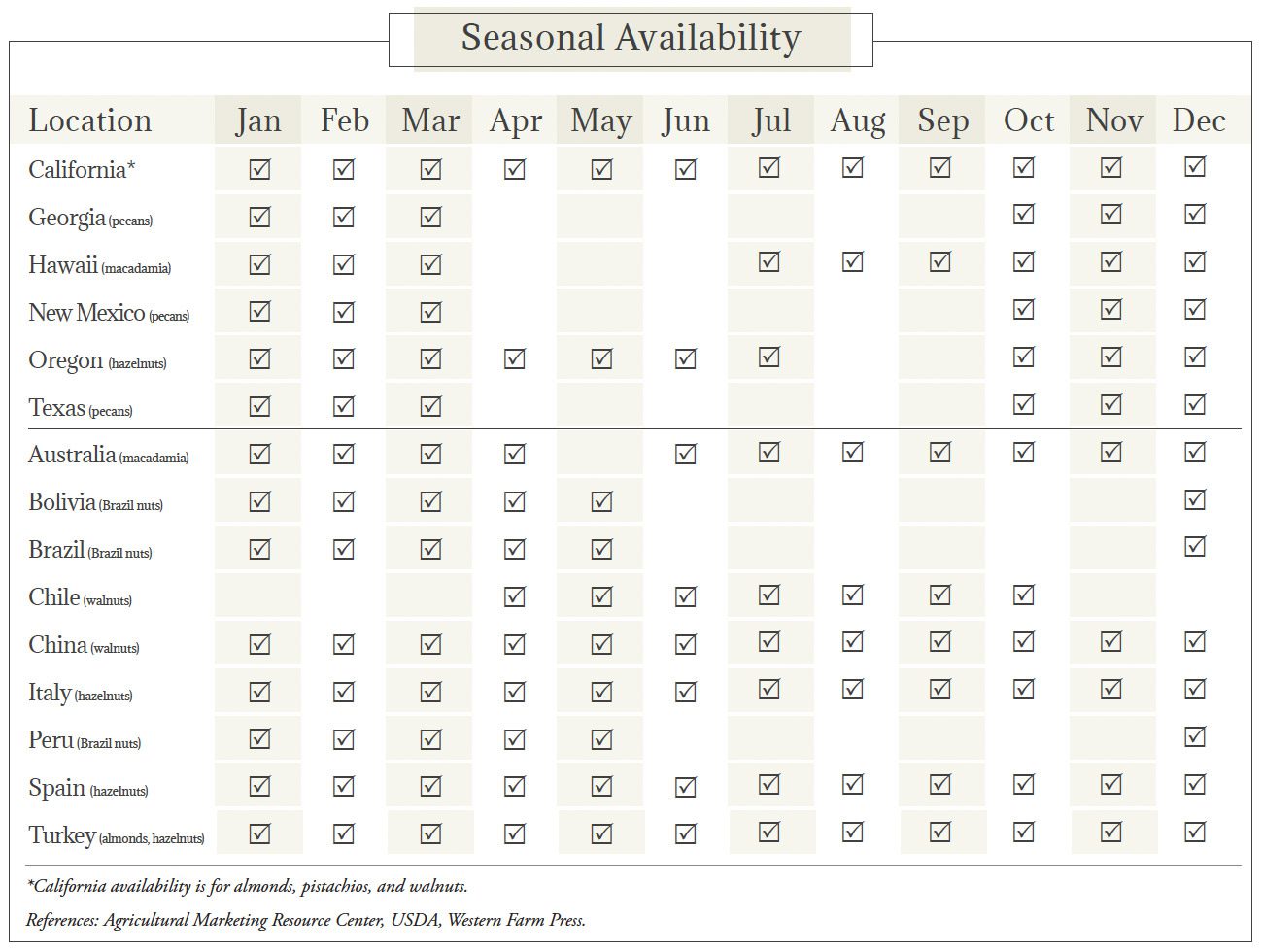 Depending on the variety and location, tree nuts can be vulnerable to numerous diseases, including eastern filbert blight, lethal to hazelnuts; botrytis blossom and shoot blight, which can cause tender shoots in pistachios to wither and die; and bacterial spot, also called bacterial leaf spot or shot hole, which affects almond leaves, twigs, fruit, and flowers. All of the above can cause serious damage if not controlled.

Typically, lower temperatures will result in longer storage: in-shell pecans stored at 70°F can keep for up to 4 months, but can last up to 18 months at 32 to 36°F. When stored at 0°F, storage can extend to 5 or more years. Shelled nuts do not last as long as in-shell nuts due to moisture absorption.

There are no good arrival guidelines specific to tree nuts (individually or collectively). 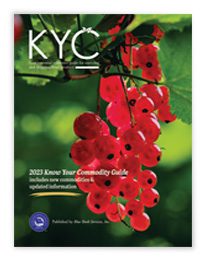