Chard is a member of the same family as beets yet does not feature a well-sized edible root, instead it is cultivated for its colorful stalks and leaves.

Beta vulgaris var. cicla, chard, is a descendant of the sea beet and has been cultivated since at least the third century. Swiss chard is thought to have originated in Sicily and was so-named to distinguish it from the competing French leafy greens of the time.

The leafy vegetable can be consumed both raw or cooked and is often substituted for spinach, despite being more similar in flavor, with slightly bitter undertones, to kale. Swiss chard is perhaps best known for its brightly colored stalks, which when bundled together are commonly sold as rainbow chard. 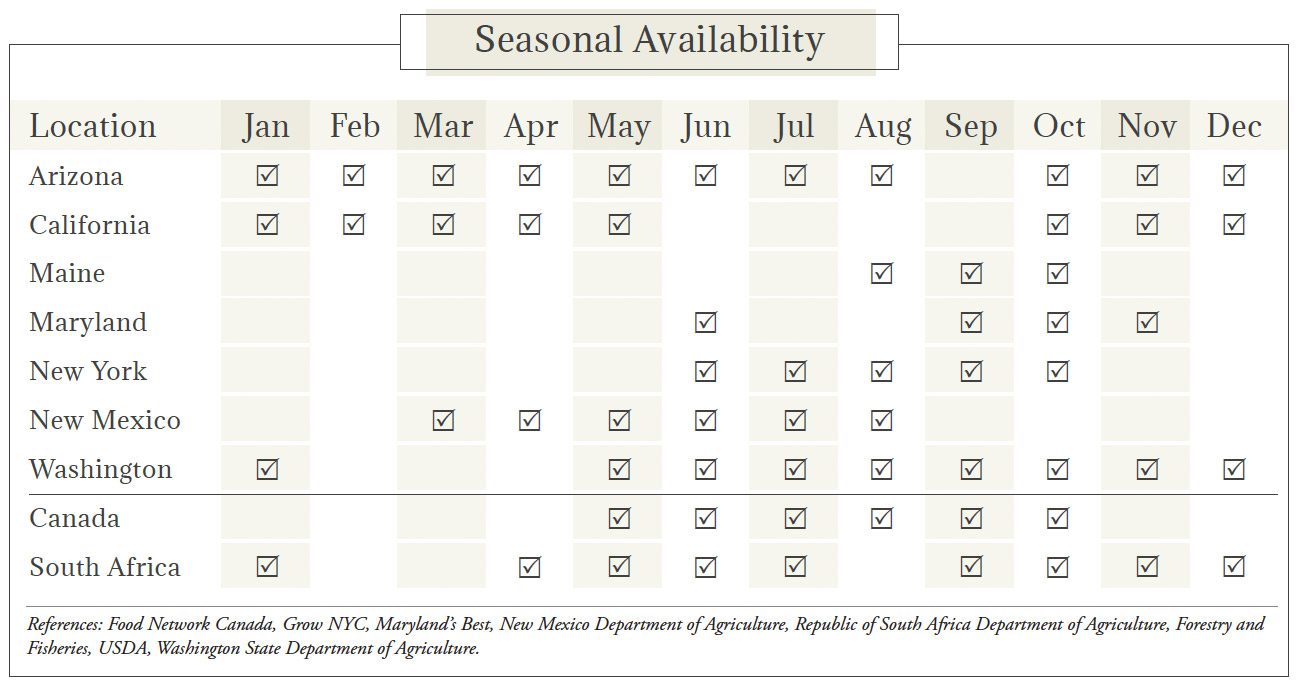 Types & Varieties
Swiss chard stalks can range in color from white to red with shades of yellow in between. Varieties are typically selected by their hue, with popular varieties such as Burgundy, Rhubarb, and Ruby Red for the reds and Fordhook Giant, Geneva, Large White Broad-Ribbed, Lucullus, Perpetual, and Winter King for whites. Bright Lights is a mixed-color variety.

Swiss chard is a hardy vegetable growing well in most environments and is plentiful in the Northeast, Southwest, and Northwest, where it is generally available all year. Internationally, chard is grown in Canada and South Africa as well as across the Mediterranean region.

Swiss chard is typically seeded rather than transplanted and grows well in sandy loam to silty soils with high organic content and good drainage. It is fairly hardy and can grow in most soils, but tends to be sensitive to a lack of boron, often caused by irregular watering.

Due to the plant’s vigorous growth, trimming is recommended, but especially early on. Chard is sensitive to extreme summer heat but reasonably tolerant to frost.

The greens are typically harvested by hand multiple times throughout the season, especially if the outer leaves are harvested first and care is taken not to damage the center bud. Young leaves are typically enjoyed fresh in salads while the more bitter-tasting mature leaves are cooked.

Pests & Diseases
Rootknot nematodes, tiny thread-like eelworms living in the soil, can cause stunting, wilting, and loss of vigor. Aphids, with their colorful tiny bodies, will not only damage the crop but also spread viruses leading to mottled, curled, or yellowed leaves.

Blister beetles, or the “old fashioned potato beetle,” overwinter as larvae in soil and tend to swarm close to ripening, feeding on crops.

Powdery mildew often overwinters and leads to white spots on leaves and in certain conditions can be spread widely via spores in the air.

Storage & Packaging
Much like spinach, swiss chard is very perishable and should be handled with care postharvest. Vacuum cooling or hydrocooling to a temperature as close to 32°F as possible is ideal. At this temperature, swiss chard can be stored for 10 to 14 days.

Relative humidity of 95% is recommended with adequate air circulation to prevent excessive wilting and transpiration. Swiss chard is typically bundled and boxed in crates with holes for circulation.

Currently, there are no USDA grades or good arrival guidelines specific to swiss chard.