Fragaria x ananassa, more commonly known as strawberries, are a perennial in the rose family. The strawberry has an incredible reach and can be found in native forms on every major continent excepting Africa and Australasia (Australia and New Zealand).

Today, strawberries are grown in all U.S. states and Canadian provinces, with California leading production most of the year, then Florida picking up domestic supply in the late fall and winter months.

The deep red fruit was once much smaller, but selective breeding and adaptation have resulted in larger, juicier berries for the fresh market.

Strawberries are not, however, considered true berries since their tiny black seeds are on the outside instead of inside the fruit; for this reason, they are classified as “aggregate accessory fruits.”

Although most strawberries are grown for the fresh market, they are also frozen and processed into a number of items such as jams and purees. 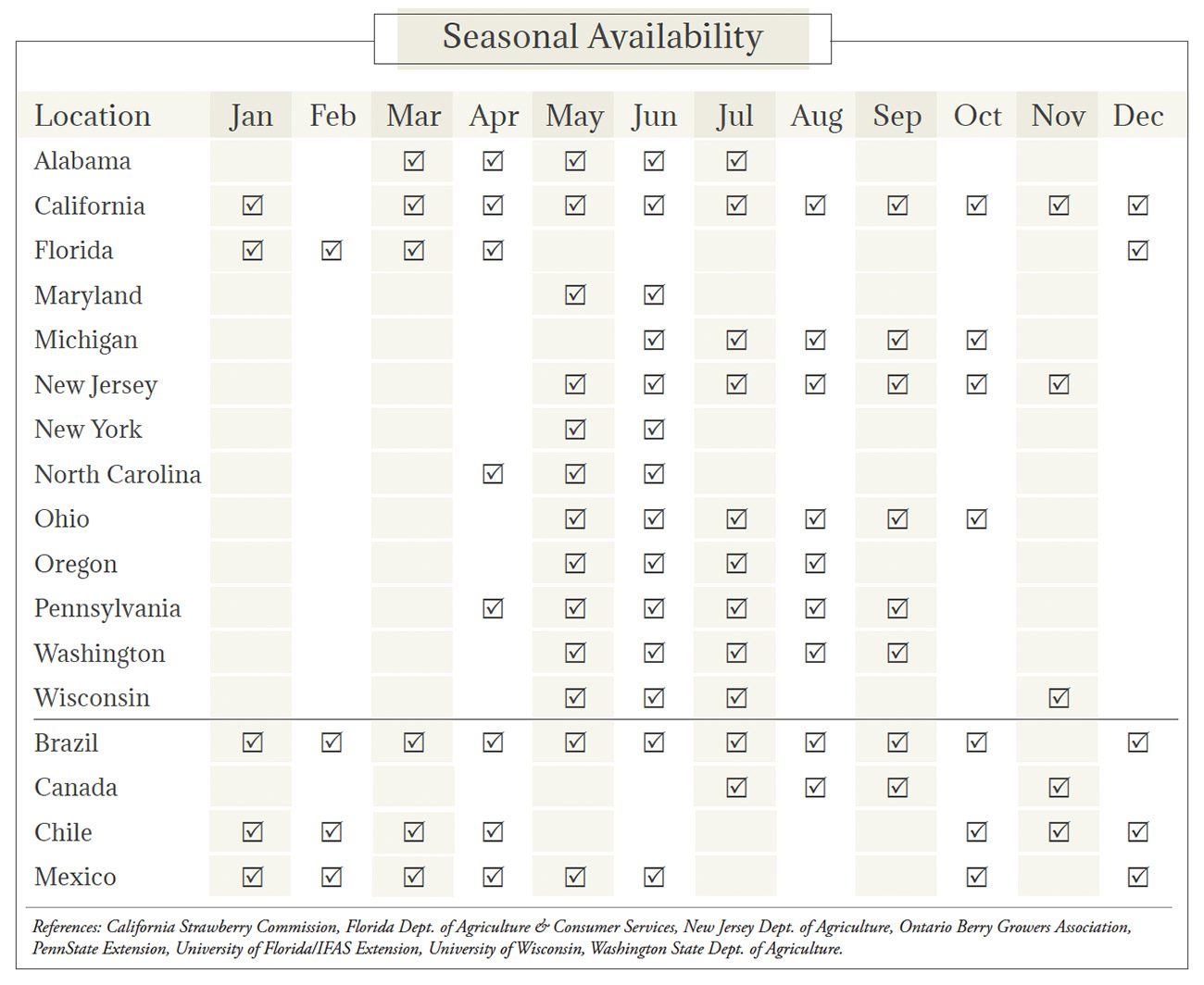 Types & Varieties
Strawberries are generally described as June bearing, everbearing, or day neutral. June bearing refers to the two- to three-week period the crop produces fruit in the spring. These crops typically produce berries larger than everbearing and day-neutral types and are more popular with commercial growers.

June bearing types have three different varieties: early, mid-season, and late. Everbearing do not produce crops all season as the name implies, but rather once in spring and again toward the end of summer.

Depending on region, everbearing varieties can produce three crops: one in spring, summer, and fall. Day neutral types produce fruit all season long. All three types are highly susceptible to frost damage.

Strawberries grow best in warm weather with low humidity making Southern California a prime location for cultivation. They are also grown in the eastern United States with smaller yields, predominantly sold through u-pick operations or farmers markets. An exception is Florida, the nation’s top strawberry producer in winter months.

Well-drained sandy loam, rich in organic matter, is ideal for strawberries. The area should be in full sun, have a gradual slope, and not previously used to grow peppers, potatoes, eggplant, or tomatoes since root rot can live in the soil and attack strawberry plants. Recently plowed areas that were previously grass are also not recommended as weeds and white grubs could become a problem for new strawberry plants.

Strawberries are picked by color and maturity and harvested by hand. New robotic pickers, being tested in Florida, may have a significant impact on this highly labor-intensive process. Berries should be picked when temperatures are cool, such as in the morning or evening.

After harvest, beds should be refruited or replanted depending on soil health. Most growers replant every 3 to 4 years to prevent disease development and reduced yields.