Pineapple is the fruit-head of a tropical plant with long, sword-like leaves. Originally found growing wild in southern Brazil and Paraguay, pineapple was cultivated throughout South and Central America long before continental trade developed. Spanish sailors later brought pineapple to the Philippines, and then to Hawaii in the sixteenth century.

The first Hawaiian pineapple plantation was established in 1885 on the island of Oahu. From the 1920s to the 1960s, the Hawaiian islands were major producers of the exotic fruit. Soon after, other tropical regions began to grow and sell the fruit much cheaper—and without delays due to long-distance shipping—gaining a significant share of the market.

Most U.S.-grown pineapple still comes from either Hawaii or Puerto Rico, though there is small-scale production in parts of Florida and California. The bulk of pineapple consumed in the United States comes from imports by way of Central and South American or Mexican grower-shippers.

Pineapple flesh ranges in color from very light to rich golden yellow. The most common commercial variety is the Smooth Cayenne, which produces 5- to 6-pound fruit with yellow flesh and relatively high sugar content. Hilo is a Smooth Cayenne variant that grows in Hawaii.

Other varieties include the Red Spanish, a little smaller at 2- to 4-pounds with more of a square shape; Queen, a 2- to 3-pound fruit with sweet yellow flesh and a crisper texture; Singapore Spanish, a larger variant with yellow flesh; and Sugarloaf, larger still at 5- to 6-pound fruit, with pale, white flesh and a core that can be eaten.

Many other varieties are grown around the world, including India’s Giant Kew, which can weigh up to 10 pounds, and the Cabezona, a variant of the Red Spanish culitvar, grown in

Pineapple grows best in tropical environments receiving at least 40 inches of rain annually. In growing areas with less plentiful or more sporadic rain, such as the islands of Hawaii, irrigation may be necessary. Rich, loamy, loose soils with good drainage and a low pH (ranging from 4.5 to 6.5) are best for optimal growth.

Pineapple is a syncarp, meaning it is comprised of many ?owers fused into one unit that then ripens. New crops can be cultivated from portions of old pineapples such as crowns, leafy fruit tops, or undeveloped fruit or floral buds.

Pineapple is a perennial plant, producing 2 to 3 crops in approximately 32 to 46 months. New plants take about 18 months to bear fruit. Fruit can grow up to 12 inches in length and 5 to 6 inches in width, with each plant typically producing from 1 to 3 heads.

Pineapple is harvested both by hand and semi-mechanical methods. Once picked, it is then washed, waxed, and usually treated with a fungicide before sorting and grading.

Ensuring adequate drainage and airflow can prevent most rots and diseases from taking hold and damaging plants or developing fruit.

Common pests include mealybugs, mites, scale, and nematodes in the soil. Nematodes damage roots while other pests attack the leaves and fruit. Ants may cultivate both mealybugs and scale as their own food source, and then ‘farm’ them into other crop areas.

Fruit should be cooled quickly for optimal shelf life; if stored at 45 to 46°F pineapple will continue to ripen and last up to 4 weeks. Storing fruit at 45°F or below will cause chilling injury and can impact the taste and texture of fruit.

There are no published guidelines specific to Canada for this commodity.

• Surface mold, including mold in the stem area, is scored as a defect when affecting more than 25% of the fruit’s surface

• Discoloration affecting pineapple tops is a defect when more than 25% of the crown leaves are discolored. 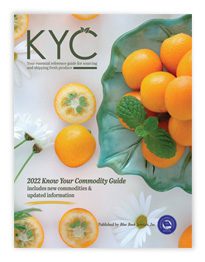