Fresh peas (Pisum sativum) are part of the extensive legume family with thousands of species worldwide, grown for millennia. Some believe early varieties originated in the Mediterranean basin, though others cite Asia as their birthplace, before spreading to Europe. They made their way to America sometime after Columbus.

Green peas, often called “shelling peas,” garden, or English peas (and not to be confused with dry or cowpeas), are the most common edible pea, with a tough pod that is not consumed.

Snow peas or Asian pod types are thinner and flatter than green peas. Referred to as mange-tout by the French, translating as “eat it all,” explains the chief difference between the two types. The Chinese are credited as the first to consume peapods without removing the seeds.

Botanically, peas are a fruit since they have internal seeds originating from a flower. Austrian Gregor Mendel, often considered the father of modern genetics, was the first to map out the specific genetic traits of peas. 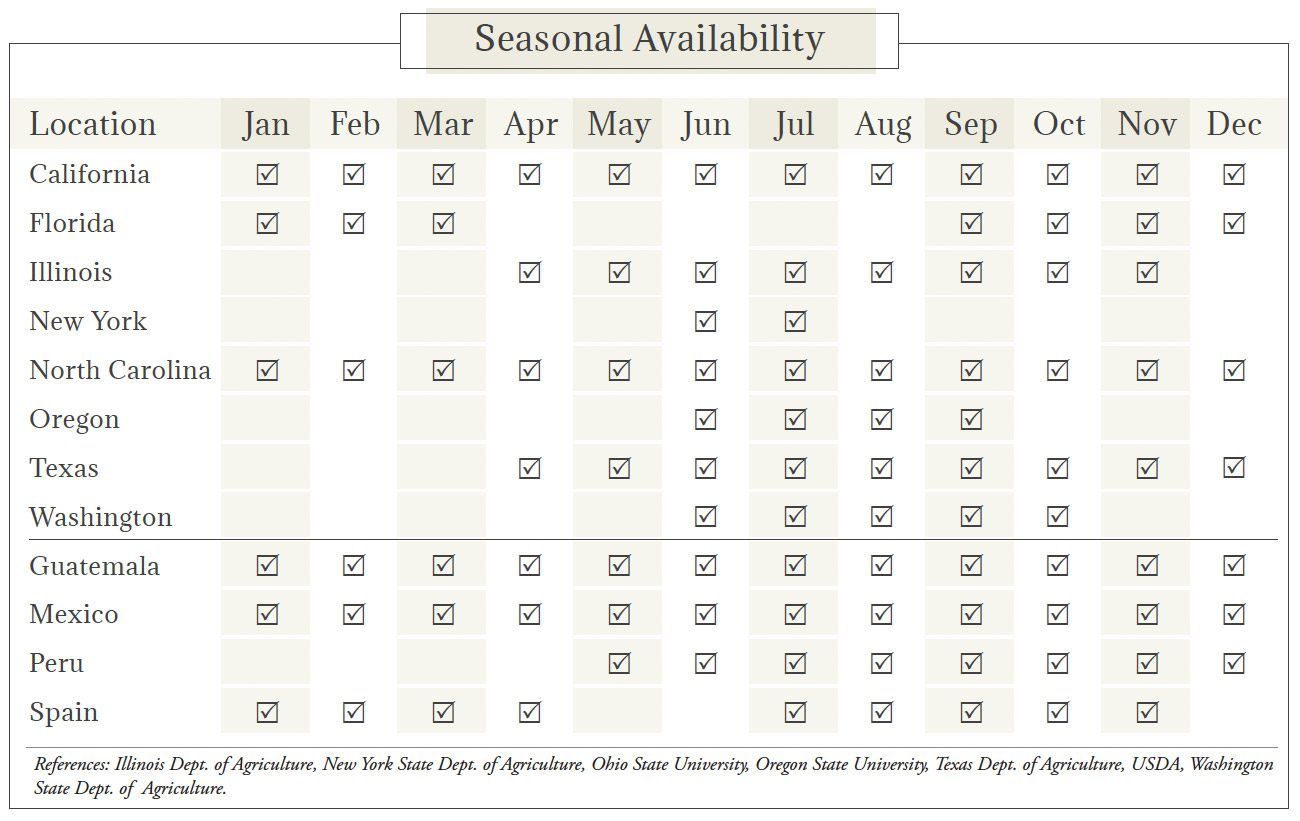 Types & Varieties
Green peas are shelled and eaten without their pod. In the United States, most green pea crops are either frozen or sent for processing. Garden pea varieties have either smooth or wrinkled seeds: the former tend to have more starch and the latter are generally sweeter and preferred for fresh consumption.

The smooth-seeded types are favored for producing ripe seeds, which are then used like dry beans to make split-pea soup. Recommended varieties include Sparkle, Little Marvel, Green Arrow, Wando, Daybreak, and Spring.

Snow peas (also called sugar snap peas or Chinese peapods) are broad, flat, and crisp with a tiny bulge of seeds visible at prime eating stage. Each pod contains 5 to 7 seeds and averages 3 to 3.5 inches in length.

Snap peas are a cross between green and snow peas with well-developed, fully rounded seeds and an edible pod averaging 2.5 to 3 inches in length. Common varieties include Snowbird, Dwarf Baby Sugar, and Snowflake.

Peas thrive in cool, moderate climates. The best soils are silty, sandy, or clay loams with good drainage and a pH up between 6.0 and 7.5. While plants need a generous supply of moisture, too much will reduce yields.

Most plants, when seeded in the spring, can withstand a frost though not extended periods of cold. Overly warm temperatures will affect flowering. Peas will be ready for harvest about 3 weeks after bloom and should be picked before maturity. Pods should be soft without bulging seeds.

Snow peas are classified as either determinate (a creeping, ground crop grown without the need for trellises) or indeterminate (taller, climbing, and requiring the support of trellises) and are slower to mature, requiring 6 to 7 weeks after seeding for spring crops.

Harvest should begin a week to 10 days after flowering to assure sweet, flat, fiberless pods, without visible seeds and should continue daily. For sugar snap peas, pods should be plump, round, and with nearly full-sized seeds.

All peas should be bright green (without yellowing), firm, and free from blemishes or damage. For peas destined for processing, mechanical harvesting is the norm.

Pests can suck nutrients from plants and cause damage to stems, blossoms, and pods throughout the growing season. Stink bugs damage seeds and pods and also transmit yeast-spot disease.

Grey and white molds, blight, fusarium wilt, and mosaic viruses can wreak havoc with young peas, either killing the plants or causing extensive damage inside pods or on leaves and stems with white, yellow or brown patches or sunken spots.

Downy mildew can attack if night temperatures fall or there is excessive moisture in the air. Lower leaf surfaces can become covered with fluffy whitish-grey fungal patches, which can darken with age; upper leaves have symptoms similar to wilt with yellow or brown areas and/or sunken spots.

Storage & Packing
Peas (especially snow peas) are highly perishable and should be cooled after harvest. Waxed cartons or clamshells are often better than plastic bags due to condensation. Regardless of packaging, snow peas can lose quality rather quickly, in as little as 7 days.

Additionally, steer clear of ethylene-producing commodities for green peas, though snow peas are only moderately affected by ethylene.

Grades for fresh green and snap peas include U.S. No. 1 and U.S. Fancy. For U.S. No. 1, pods shall have similar varietal characteristics, not overmature, excessively small, badly misshapen, or watersoaked, and fairly well filled, fresh, firm, free from decay and damage (caused by black calyxes, freezing, splitting, hail, dirt, leaves, or other foreign matter, mildew or other diseases, insects, or mechanical injury). Peas shall be at least fairly tender, free from decay and damage caused by split skins, disease, insects or mechanical injury or other means.

For U.S. Fancy, pods shall be well filled with an average of three-fourths or more within any lot, but not less than one-half of the pods in each container with calyxes of a fairly good green color, and meet the requirements of U.S. No. 1 grade in all other respects.

Peas
Generally speaking, the percentage of defects shown on a timely government inspection certificate should not exceed the percentage of allowable defects, provided: (1) transportation conditions were normal; (2) the USDA or CFIA inspection was timely; and (3) the entire lot was inspected.

Snow Peas
Generally speaking, the percentage of defects shown on a timely government inspection certificate should not exceed the percentage of allowable defects, provided: (1) transportation conditions were normal; (2) the USDA or CFIA inspection was timely; and (3) the entire lot was inspected.