Ginger is a flowering plant, indigenous to China, and grown in India and other parts of the world, including Hawaii. The ginger root (commonly just called ginger) is harvested and used as a spice, side dish, natural remedy, and for flavoring. The root, or rhizome, contains oils that give ginger its aromatic and spicy flavor and smell. A clump of ginger roots is often called a “hand.”

Historically, Jamaicans popularized ginger root after it made its way to Europe in the 1500s as part of the spice trade. Today, ginger is available all year, supplied by overlapping growing seasons across the globe. China, Brazil, and Thailand are among the top exporters, and top importers include Japan, the United States, and the United Kingdom. 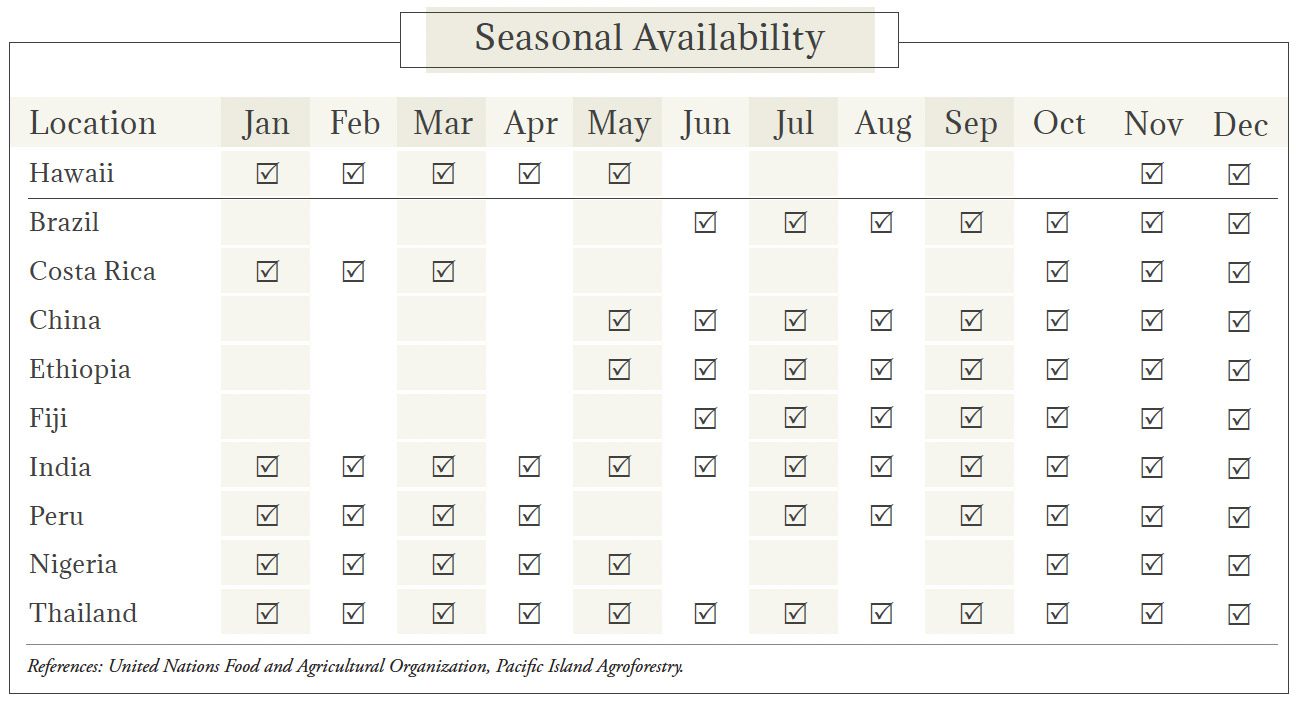 Types & Varieties
Of the family Zingiberaceae, ginger comes in several varieties, the most common being Chinese, or yellow ginger, and the smaller, more pungent Japanese ginger.

Thai ginger, or galangal, has a smoother, smaller root and similar flavor and odor.

In the United States, both Chinese and Japanese ginger are grown in Hawaii and shipped to the mainland, though the majority of U.S. supply is imported from China, Brazil, Thailand, and Central America.

Ginger grows well in loose, calcium-fortified, fertilized soil at 5.5 to 6.5 pH levels. Beds should be well drained to avoid root contamination and reduce disease and pests (if soil is fumigated for nematodes, this can damage the rhizome and render it unsaleable).

Beds should also be mounded periodically to keep plants from turning and growing horizontally. Avoid weeds and other debris that can attract pests and damage shoots.

Young ginger is harvested early, after a few months. A mature crop can be up to 10 months in age, with the plant adding significant weight to the root in the last month of the growing cycle. Roots can be harvested by hand, with a digger or mechanically. Quality is characterized by skin sheen and color, size of the rhizome, and the absence of defects.

Pest & Diseases
Common pests include the Chinese rose beetle, which feeds on the leaves of the plant; Fijian ginger weevils, which burrow into roots and can kill plants; the ginger maggots feed on rotting roots and plants, and can transmit disease to healthy crops; while cornstalk borer caterpillars can damage shoots and plants in dry conditions.

Other diseases that can cause root defects such as lesions, cracking, russeting, and rot include root-knot and burrowing nematodes, leafspot, and alligator skin.

Storage & Packaging
Proper postharvest storage is critical to prevent spoilage by fungi and bacteria. Washing, drying, and curing for 3 to 5 days reduces the risk of mildew on root ends. Cured ginger will store 60 to 90 days at 54 to 57°F and 85 to 90% relative humidity; or 4 to 6 months at 55°F and 65 to 75% relative humidity.

There are no U.S. or Canadian good arrival guidelines at present for ginger root.