The avocado (Spanish aguacate, cura, cupandra, or palta; Portugese abacate, French avocatier) is a berry and the only well known edible fruit-bearing member of the laurel family. Long native to the Americas, by 1653 three varieties had been identified: Guatemalan, Mexican, and West Indian.

In 1696 an Irishman, Sir Hans Sloane, is thought to have coined the word ‘avocado’ when he included it in a catalogue of Jamaican plants, including its popular nickname ‘alligator pear’ due to its bumpy skin.

Other monikers include ‘midshipman’s butter’ and ‘butter pear’ as well as the ‘avogavo pears’ George Washington wrote of during a visit to Barbados in 1751. Varieties were cultivated and crossbred over the next century, and though avocados were introduced to Florida in 1833, they did not become a phenomenon until the 2000s, long after they began appearing in salads in the 1950s.

Skin texture can be bumpy or smooth and waxy. Color, too, can vary from bright green to deep evergreen, emerald, or even an eggplant hue.

Commercial and aesthetic rivalries exist between Florida and California varieties; California fruits are often considered as having a higher fat content, while Florida iterations are less caloric, such as the Slimcado hybrid.

Viewed as a unicorn of U.S. produce, demand for avocados increased sevenfold in three decades and continues to climb as more Americans eat the fruit as a snack and find inventive ways to include them in meals throughout the day.

Types & Varieties
The three main types of avocados—West Indian, Guatemalan, and Mexican—vary in size, color, and flesh. West Indian varieties have leathery, pliable, nongranular skin and have low oil content. The skin of Guatemalan varieties ranges from thin to very thick, and granular. Mexican varieties have high oil content (up to 30%) with thin and tender skin. They are also more cold-resistant yet the least tolerant of salt. The least cold tolerant are West Indian types, yet they have a high salt tolerance. Salt tolerance is important as soil salinity can reduce fruit yields.

Florida avocados can be described as more aqueous and are known for having less fat and calories like the well-marketed Slimcado. Some avocado-purveyors equate higher fat content with better flavor; regardless, production in Mexico, as well as Central and South America continues to surge to meet demand throughout North America and the rest of the world.

Windbreaks are necessary in areas of strong wind as it reduces humidity, dehydrating flowers and causing fruit to fall prematurely. Despite its many prerequisites for climate, the avocado tree does well in most any type of soil, but good drainage is required. Trees should be spaced 25 feet to 35 feet apart depending on soil type. Branches will die back if touching another tree. Upper soil should stay moist and fertilizing must wait until after blooming when the fruit is firmly set.

Avocado trees can grow up to 60 feet tall or higher, though such height is impractical for commercial production (many growers cut trees back to 16 to 18 feet, then allow them to reach up to 30 feet before cutting back again). Developing avocados are heavy and may require propping up branches to avoid breakage.

An inhibitor in the fruit stem prevents avocados from ripening on the tree. Though many would presume that when the fruit starts to fall off the tree it is mature, maturity is generally determined by weight and oil content. In Florida, harvest is tied to calendar dates as these varieties tend to have lower oil content. 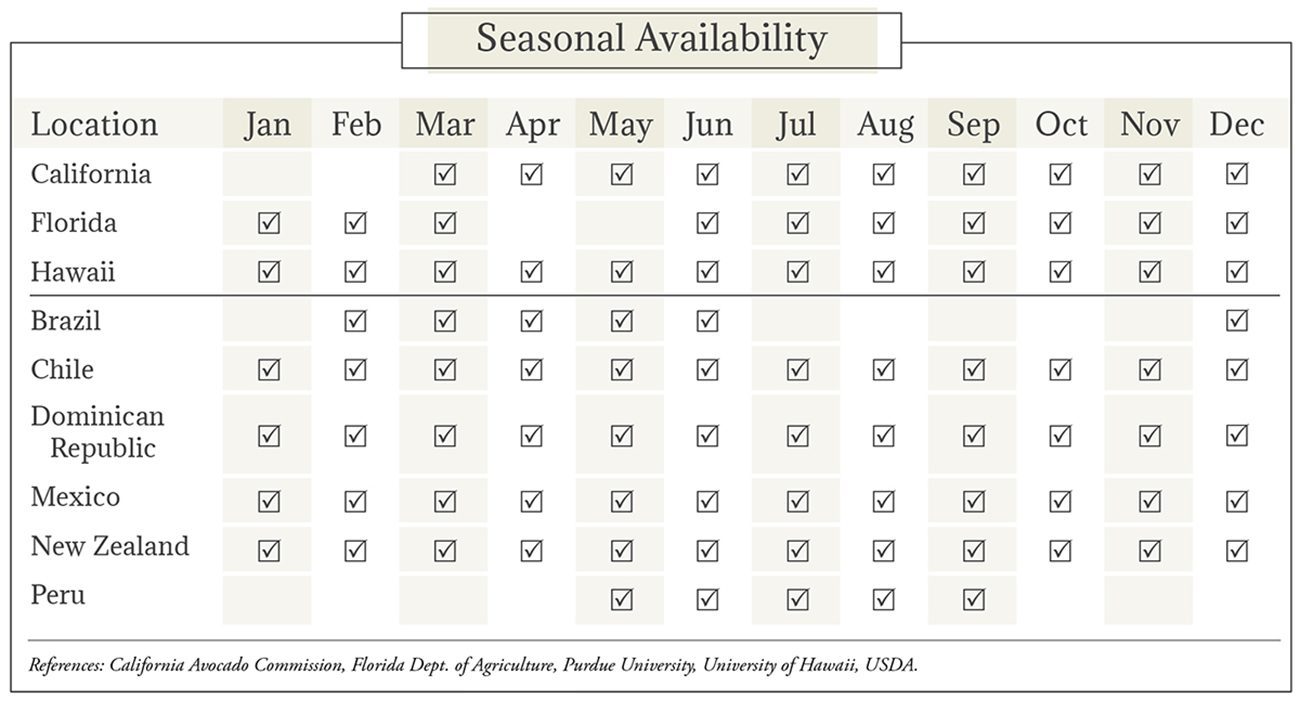 Pests & Diseases
Western avocado leafroller is a caterpillar that causes severe damage by consuming the tree’s leaves and feeding on the fruit itself. Avocado thrips lay their eggs on the underside of leaves and feed on the fruit, damaging the skin. They also feed on the leaves, producing scars and a bronzed hue.

The omnivorous looper also feeds on leaves; healthy trees can usually tolerate the damage but extensive leaf loss can cause sunburn and affect yields the following year. Most damage occurs when loopers eat the fruit, which can scar and distort skin. Other pests of concern include beetles, fruit flies, mites, and mealybugs, though many insects can be neutralized through the release of beneficial predators.

Phytophthora cinnamomi or avocado root rot is minimized by tolerant rootstocks. Anthracnose is recognized by unhealthy or dead leaves, but can affect the flowers, fruit, and twigs as well. Yellow spots on leaves will turn brown before spreading to the whole leaf. Trees may drop leaves prematurely if disease is severe. Affected fruit will have small sunken areas with lesions becoming darker and larger after harvest.

Bacterial canker is noticeable on the bark as slightly sunken, dark areas. White powder forms around or over the lesion, which is left behind after fluids dry. Scab produces spots that become sunken in their center as fruit matures. Lesions on leaves are less noticeable, as they are more prevalent on the upper canopy than lower branches. Spots start out small but increase in size until the center drops out. Other diseases to look out for include leaf-tip burn, leaf spot, and other types of rot.

Storage & Packaging
Optimum temperature for mature green avocados (depending on variety) is 41 to 55°F and 36 to 40°F for ripe fruit with 90 to 95% relative humidity. Avocados produce ethylene after harvest, which increases significantly as they ripen.

Treating avocados with ethylene can induce ripening in 3 to 6 days depending on the variety and maturity. Controlled atmospheres will delay softening and reduce ethylene production.

Avocado grades consist of U.S. No. 1, U.S. Combination, U.S. No. 2, and U.S. No. 3; for U.S. No. 1, avocados must be of similar varietal characteristics and be mature but not overripe, well formed, clean, well colored, well-trimmed, and free from decay, disease, bruises, cuts, or other skin breaks, scars, sunburn or sunscald, discoloration, and damage from insects, freezing or mechanical injury.

The U.S. Combination grade consists of both U.S. No. 1 and U.S. No. 2, with at least 60% meeting U.S. No. 1 specifications. For U.S. No. 2, avocados must be of similar varietal characteristics, be mature but not overripe, fairly well formed, clean, fairly well colored, well-trimmed, and free from decay, disease, bruises, cuts, or other skin breaks, scars, sunburn or sunscald, discoloration, and damage from insects, freezing or mechanical injury.

For U.S. No. 3, fruit must be of similar varietal characteristics, mature but not overripe, not badly misshapen, and free from decay, serious damage caused by disease, bruises, cuts, or other skin breaks, scars, sunburn or sunscald, discoloration, and damage from insects, freezing or mechanical injury.

• Avocados imported into the United States must meet minimum grade requirements prior to importation (i.e., release by U.S. Customs) per the Agricultural Marketing Agreement Act; this means avocados must grade at least U.S. No. 2, in the U.S. Standards for Grades of Florida Avocados
• Maturity requirements also apply to avocados other than Hass, Fuerte, Zutano, and Edranol varieties
• The fungus, anthracnose, is a “free from” defect of the U.S. No.1 Grade, therefore, if anthracnose is present in any amount it is scored as a defect against the 5% tolerance (i.e., as serious damage); if it penetrates the flesh or when the anthracnose spot is soft, score against the 1% tolerance for decay (i.e., as very serious damage)
• The fungus cercospora spot is also a “free from” defect of the U.S. No.1 Grade but is scored against the 10% tolerance for total defects.