Zucchini, a member of the summer squash family of cucurbits (Cucurbita pepo), owes its name to the Italian word for a small pumpkin or squash, zucchina.

Historians believe squash was first grown in Central and South America, then taken to Europe where Italians more fully developed summer cultivars such as zucchini.

Zucchini is also called courgette, a variation of the French word courge, meaning squash, or referred to as a ‘marrow’ vegetable in Great Britain.

Widely considered a vegetable, botanically, zucchini is a fruit. Many dishes include use of both (raw or cooked) squash as well as its delicate flowers (frequently battered and fried).

Although zucchini can grow up to several feet in length, most is harvested and consumed while immature, before the hardening of seeds and rinds and a corresponding loss of flavor and quality. In South Africa, zucchini is mostly grown and harvested as a baby vegetable, called baby marrow.

Generally the most popular of the summer squashes, demand for zucchini continues to grow steadily in the United States. It can be grown nearly anywhere with consistently warm summer temperatures. To keep up with demand, the United States is the world’s top importer, sourcing primarily from Mexico. 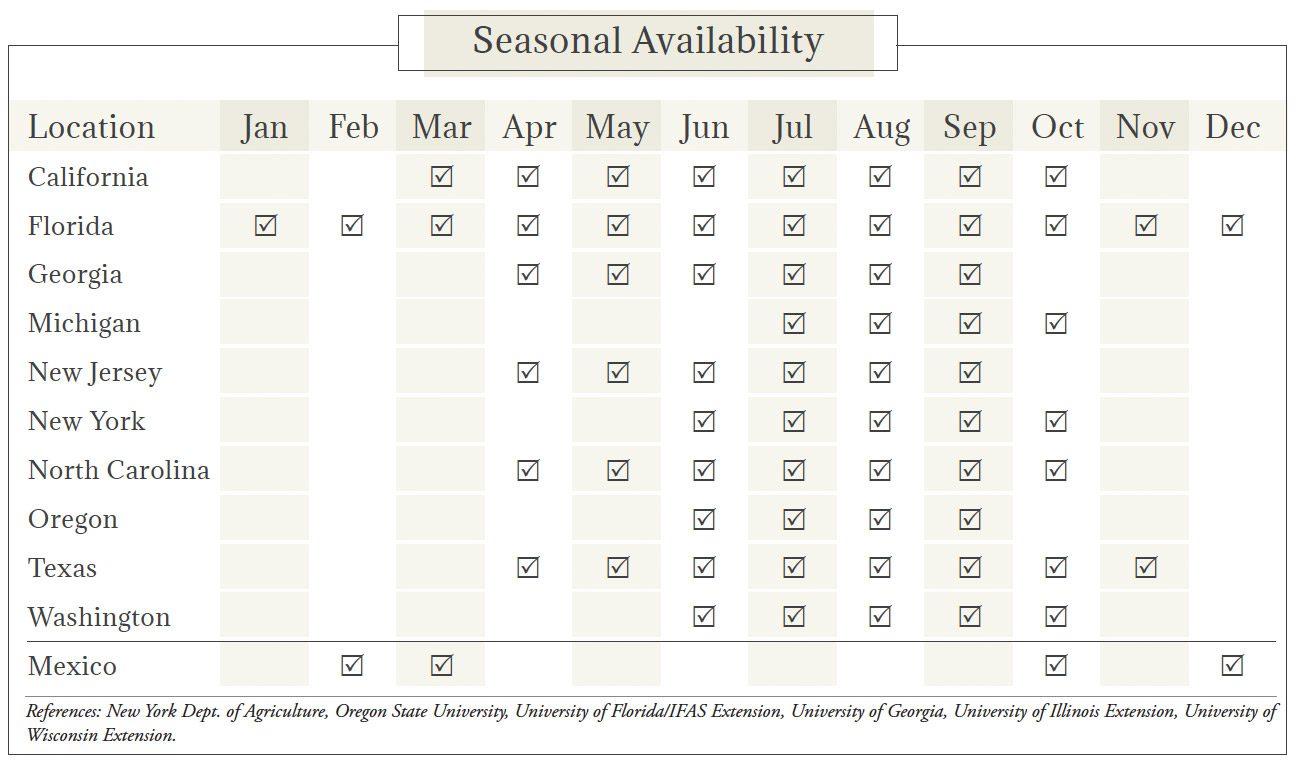 Types & Varieties
Zucchini coloring ranges from light green to very dark, almost black-green, can be striped or speckled, and is usually smooth, straight, and cylindrical with a glossy surface. Other variations include golden or white (though the latter is often considered a mutation), and rounder, ball-shaped varieties.

Zucchini grows rapidly in temperate climates with full sun and loamy soil. Most fruit grows within a week of flowering with optimum tenderness when at 6 to 8 inches in length, a diameter of 3 to 4 inches, and thin, wrinkleless skin with no soft spots. Immature zucchini is prone to bruising and scratches.

A lack of calcium will cause blossom end rot, causing watery, black bloating at the ends of fruit. Angular leaf spot can affect zucchini, cucumbers, and honeydew melons. Mosaic viruses and mildew (powdery and downy) can appear on foliage. Given the faint, green-grey markings on mature zucchini leaves,
these splotches and streaks can be mistaken for mildew, but are normal.

Storage & Packaging
Harvested immature, zucchini is not ideal for lengthy storage, but can be stored for a few days from 41 to 50°F with high humidity. It does not ripen after harvest and can be mildly sensitive to ethylene.