The tomato is a warm-season crop belonging to the nightshade family. Color patterns include red, white, purple, yellow, orange, brown, mottled, or striped.

Originating in South America, tomatoes were taken to parts of Europe by Spanish conquistadors in the sixteenth century. Others believe the fruit might have been introduced to Europe as early as the fifteenth century, making its way into France, Italy, and North Africa.

Botanically speaking, the tomato is a fruit. In 1893, however, the U.S. Supreme Court ruled it would be treated as a vegetable due to a tari? dispute. In the United States, the tomato is the second most produced “vegetable” after potatoes.

Tomatoes for processing are typically harvested by machine, while those for fresh consumption are picked by hand, in fields and greenhouses. For more information about greenhouse tomatoes, see our separate Greenhouse section.

Although China grows the most tomatoes, the United States is second, with Florida and California leading domestic production. Mexico comprises nearly three-quarters of the U.S. import market. 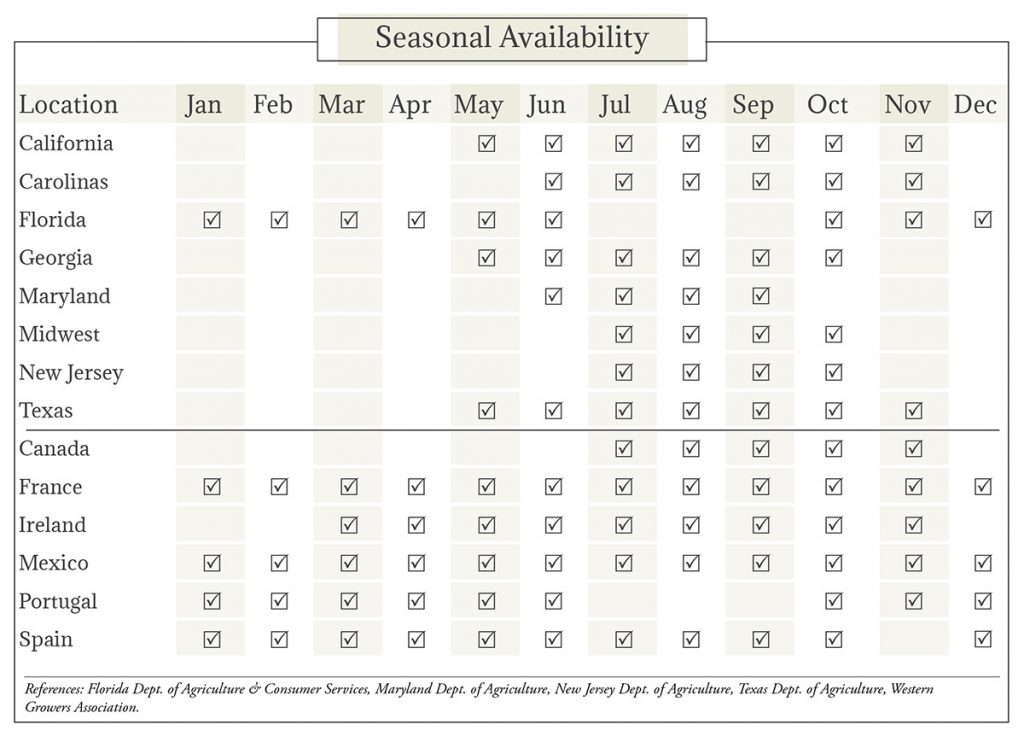 Commercially, determinate varieties are more widely grown than indeterminate as the latter are typically more popular for home gardens.

Hundreds of varieties exist as either heirlooms or hybrids. Heirloom seeds can be saved for the next season and are often used for generations.

Hybrid tomatoes are a combination of two varieties, and because seeds may produce something different from parent fruit, they are generally not saved.

Tomatoes also have several different shapes: globe, cherry, beefsteak, and plum/pear/grape. For years, the most common tomato found at grocery stores was the globe—smooth, round, and medium in size—though others continue to climb in popularity and sales.

Cherry tomatoes, also smooth and round, range in size from one to two inches in diameter. Beefsteak tomatoes are large, wide, and somewhat flat-looking. Plum or Roma, as well as pear and grape varieties, have smooth skin and are shaped as their names imply. Tomatoes as categorized by the USDA are greenhouse, fresh, cherry, or on-the-vine.

CULTIVATION
The ideal soil type for growing tomatoes is slightly acidic, well-drained, and loamy. Tomatoes should not be planted on land where peppers, eggplant, or potatoes have been grown in the last three years to avoid nematode infestations or residual herbicides.

Depending on the area, fumigation may be necessary to control pests, weeds, and some diseases. Proper staking/caging and irrigation are important for good yields.

Other pests to look out for include flea beetles, cutworms, leafminers, stink bugs, and the aforementioned nematodes in soil. Tomato pinworms, tomato fruitworms, and vegetable weevils also pose a threat.

Botrytis grey mold turns leaves brown with grey mold noticeable on stems and leaves. Fusarium wilt causes foliage to yellow and wilt. Blossom end rot will appear as dark, flattened, or sunken areas on the blossom end of the fruit and can result from insufficient calcium levels. Blight (both early and late), alternaria, big bud, buckeye rot, white mold, canker, and powdery mildew can cause problems as well.

Optimum relative humidity is 90 to 95% but extended periods of higher humidity may encourage the growth of surface mold and/or other concerns due to excess condensation.

Ethylene is typically applied to mature green tomatoes for uniform ripening. Because ripening tomatoes produce ethylene themselves at a moderate rate, storage and/or shipping with ethylene-sensitive commodities should be avoided.

GRADES & GOOD ARRIVAL
Generally speaking, the percentage of defects shown on a timely government inspection certificate should not exceed the percentage of allowable defects, provided: (1) transportation conditions were normal; (2) the USDA or CFIA inspection was timely; and (3) the entire lot was inspected.

INSPECTOR’S INSIGHTS
• Tomatoes marked as “5×6” (five rows of six tomatoes in two layers within a box) have a minimum diameter of 2.78 inches and no maximum; “Extra Large” tomatoes also have a minimum diameter of 2.75 inches but no maximum
• ‘Catfaces’ are misshapen or puckered blossom ends and involve the imperfect development of certain areas which, at maturity, are represented by an irregular, leathery scar (score as damage when the scars are rough or deep, channels are very deep or wide, or extend into a locule, or a fairly smooth catface aggregating a circle more than half an inch in diameter)
• Moldy stems or calyxes are considered objectionable when materially detracting from appearance and shall be scored as a defect, not as decay; slight amounts of mold affecting the tips of the stem or edges of the calyx shall be disregarded.