The tomatillo (Physalis ixocarpa or P. philadelphica) is a member of the nightshade family, like tomatoes, eggplant, and peppers, and is known by many names such as husk tomatoes, Mexican green tomatoes, and strawberry tomatoes. Although tomatillos look similar to Chinese lanterns, they are a separate species.

While a relative of the tomato, the tomatillo has a tight fitting, purple-veined and light-brown or green papery husk. The purple or green fruit is firm, covered in a tacky residue, and roughly 1 to 2 inches in diameter, or about the size and shape of a large walnut. 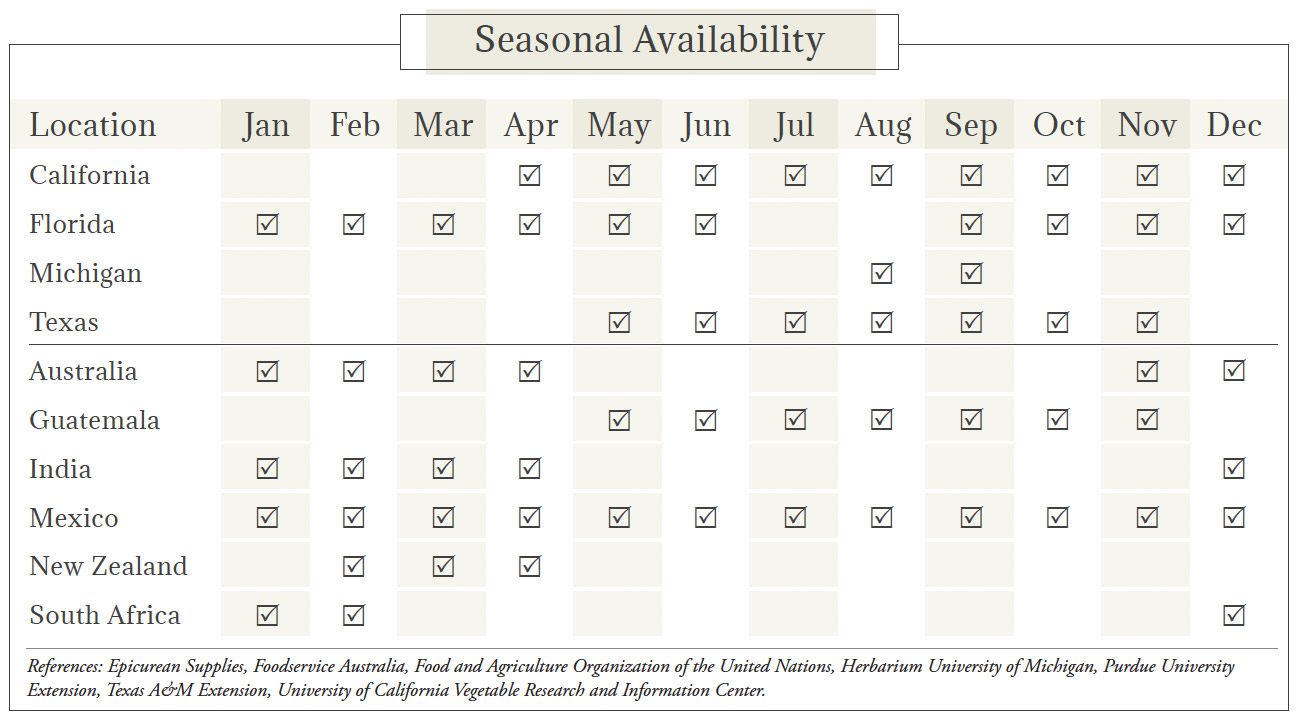 Tomatillos can be eaten immature or mature; at full ripeness, usually green or purple, they are tart and citrusy, somewhat similar to a green apple and ideal for salsa verde. Overly ripe fruit will become too sweet, bland, and yellow.

A warm season crop, tomatillos should only be planted after the fear of frost has passed. The annual prefers full sunlight and fertile, moist, well-drained soils. If drainage is a concern, tomatillos grow well in containers.

Tomatillos are often transplanted rather than direct seeded. Many growers use trellises or stakes to keep fruit o? the ground and improve air circulation.

Optimum growth occurs at 65°F with poor growth linked to temperatures below 61°F. Row covers can be used early in the season to increase warmth and promote vigor. Excessive heat during fruiting, however, will lead to reduced yields.

Pests & Diseases
Tomatillos are considered fairly disease resistant, but opportunistic pests may present challenges. The three-lined potato beetle can be a serious threat if allowed to establish itself and can overwinter in soil.

Aphids feed on the underside of leaves, causing them to crinkle, and leave ‘honeydew’ secretions that attract other pests. Tomato fruitworms can damage both leaves and fruit.

Storage & Packaging
Tomatillos are harvested once the fruit fully ?lls the husk and it has turned from green to tan or brown. Since the husk or calyx does not grow at the same rate as the fruit, when ripe, the fruit will often break through this protective covering.

Fields are typically harvested by hand, multiple times per season depending on the variety and conditions. If headed for the fresh market, tomatillos are often harvested with their husks intact.

Tomatillos produce more fruit per plant than tomatoes. As they are not graded by size, tomatillos of di?erent diameters are packed together, typically in 40-pound crates.

Tomatillos should be cooled immediately after harvest—though because the fruit is sensitive to chilling injury, temperatures should not fall below 45°F for any extended period of time.

The fruit is also sensitive to ethylene, which will cause yellowing. Typical storage and transportation temperatures range between 45°F and 55°F with 90 to 95% relative humidity.

There are currently no U.S. grade specifications for tomatillos.