Field corn, or maize, has been grown in Central America and Mexico for centuries. It was an important food source for Mesoamerica’s early tribal settlers where it grew as a field grass with edible seed buds.

Though field corn is now produced primarily for animal feed, cooking oils, and producing ethanol, it was the precursor to what we call ‘sweet’ corn. Sweet corn is a genetic mutation of field corn that causes kernels to store more starch.

During the growing cycle, the conversion of sugar to starch is slowed and moisture is retained, leading to a sweeter taste.

Sweet corn in the United States was grown in the Southwest and in the colonies by the mid-1700s, where it was cultivated by European settlers. The earliest commercial variety, called Papoon, was reportedly acquired from the Iroquois in 1779.

Today, this vegetable remains a staple of the fresh market, especially in the summer months, and is equally sought after as a frozen and canned product. California, Florida, Georgia, New York, and Washington are top domestic producers, though the vegetable is grown across the nation. 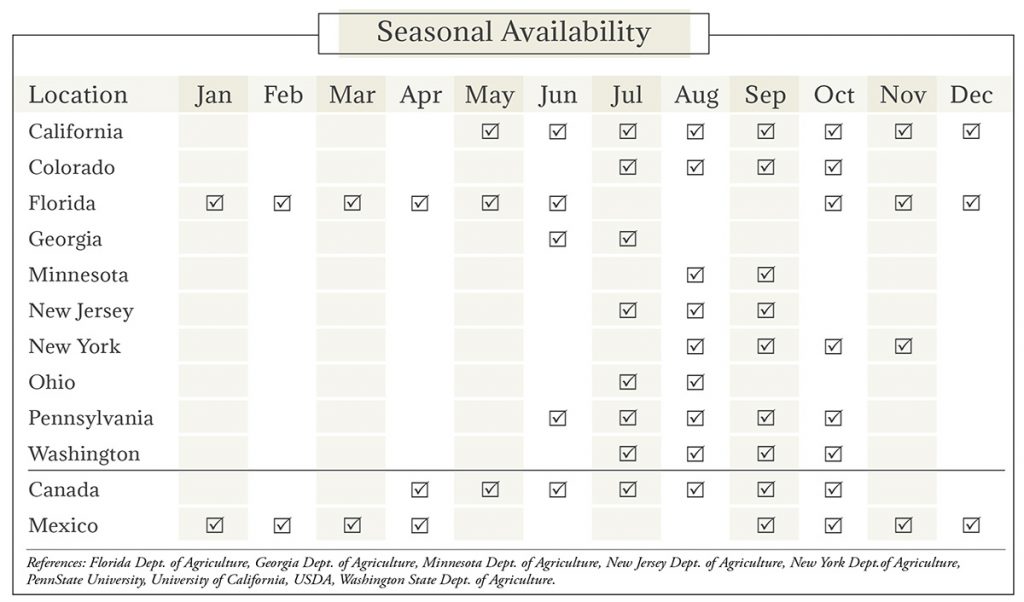 Sweet corn should be planted in well-drained soil with a 5.8 to 6.6 pH level. If crops are grown in sandy soil, irrigation is critical for ideal pollination and kernel development. Soil temperature is also a key factor and should not fall below 50°F for conventional varieties for optimal growth.

For supersweet varieties, soils should reach 60°F as germination is reduced in cooler conditions. Typically, plants will emerge in 14 days from 50°F soil, and in only 5 days in soils with a temperature of 70°F.

Ample soil moisture will increase crop yields and improve quality. Irrigation should be initiated before soil becomes dry—at least 1 to 1.5 inches a week. The most critical time for watering plants is during tasseling and silking.

Sweet corn is ready for harvest approximately 18 to 22 days after silking, when the ear is fully formed (size and length vary by variety), has a close-fitting husk, relatively dried silk, and fully developed kernels that secrete liquid when pierced.

Cutworm larvae feed on leaves after dark, causing major damage to plants and often cutting of seedlings near the soil line. Corn earworms lay eggs on fresh silk, which hatch within days. Caterpillars then crawl into the silk and feed on kernels at the tip of the ear. Once embedded, they are protected from insecticide sprays.

Common rust has become widespread due to increased planting of popular sweet corn hybrids, which are highly susceptible to the disease.

Stewart’s wilt is caused by bacteria transmitted by flea beetles. Once corn is infected, the bacteria spreads rapidly through the plant. Seedlings will develop pale green or yellow stripes before wilting and dying.

When older plants are infected, white or yellowish streaks appear on leaves, causing them to dry up and die.

Storage & Packaging
Sweet corn can be harvested mechanically or by hand in the morning before temperatures climb. Mechanical harvesters may result in ears with shorter shanks and fewer husks than hand harvests. Corn for processing is mechanically harvested and hauled in bulk.

Sweet corn will begin to lose freshness and sweetness rapidly after harvest, so it’s important to pack and ship quickly. Moisture and cool temperatures are essential to slow the sugar to starch conversion.

Hydrocooling and/or vacuum-cooling can be used after harvest, with top icing to maintain moisture. If ice is applied, storage temperatures should be slightly warmer than the usual recommendation of 32 to 34°F, up to about 36°F.

If temperatures drop below 31°F, freezing injury may occur. In addition to freezing, ice crusting can inhibit adequate air circulation.

Quality is measured by trimming, the fullness of the cob, covering, maturity, and the absence of insects, mechanical injury, or discoloration. Condition defects include freshness or husk color, maturity, kernel health and color, and the presence of decay, rust, or live insects.