The word “squash” comes from the Native American word, askutasquash, which means to eat raw, though most of today’s squash is cooked before eating.

Squash is part of the cucurbit family, which also includes cucumbers, watermelon, and pumpkins. Most varieties of squash are native to North America, with some imported from South American countries. 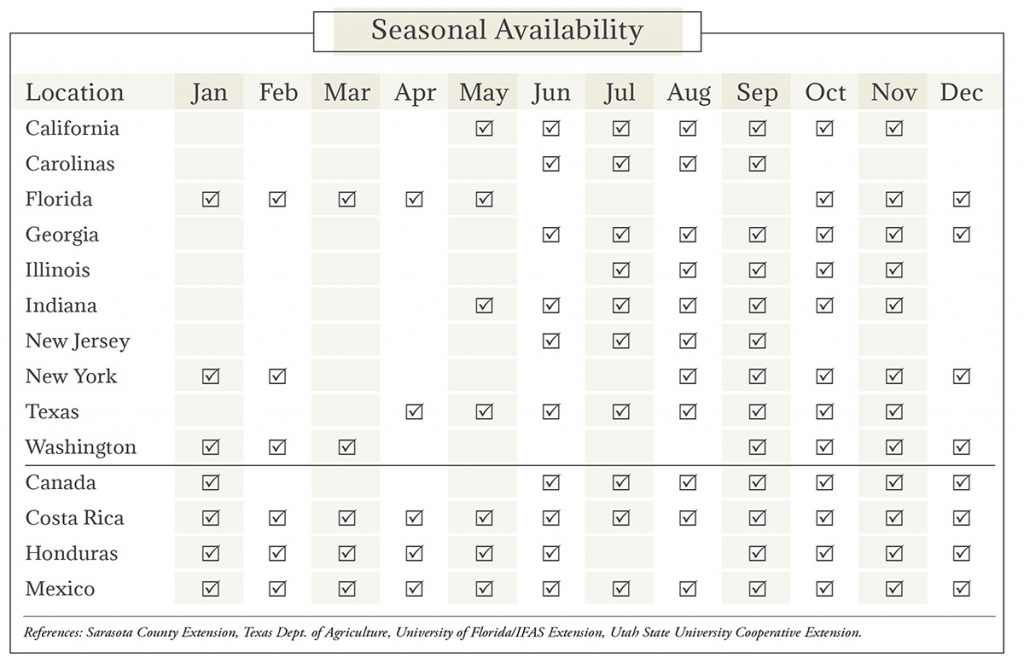 Types & Varieties
Squash is divided into two categories: winter and summer. Both are warm weather crops, with summer squash grown for fresh and winter squash often grown for storage over the winter.

Winter squash is often unsymmetrical or oddly shaped, have harder rinds for better storage, up to several months. Popular types of winter squash include acorn, spaghetti, butternut, buttercup, and hubbard.

Summer squash refers to squash that grows quickly and is harvested immature including zucchini (which has its own profile), yellow (straightneck and crookneck), and scallop squash. These have softer rinds and are often eaten before full seed development when the ?esh is still tender.

Calabaza (Cucurbita moschata), a type of hard squash well known in Latin America and across the subtropics, is also called pumpkin in the West Indies, Cuban pumpkin or Cuban squash in Cuba, ayote in Central America, auyama in the Dominican Republic, kalabasa in the Philippines, and zapallo in South America.

Calabaza grows quickly into a round or pear-shaped gourd, with ripe yellow or orange flesh. It is similar in flavor to butternut squash, another hard-skinned or winter squash of the same genus, and is often used in soups, sauces, and pies.

All squash need warm weather to grow and should not be planted until the risk of frost has passed and ground temperatures are at least 60°F, preferably 70 to 90°F.

Squash is best planted from seed (transplants are very fragile) and prefer well-drained, sandy and loamy soils, rich in organic matter with a pH level of 6.0 to 6.5. Crops should be rotated on an annual basis.

Calabaza can be harvested fully ripe, typically between 100 and 115 days, or immature. It is also known for its long vines, tendency to smother weeds, and tolerance to pests and disease.

All squash require adequate water and good drainage, and a barrier or platform of some sort to keep fruit off of the soil can prevent rot and pest damage.

Pests & Diseases
Squash are susceptible to several pests and diseases. The most prevalent diseases are wilt, mildew and rot. Good crop rotation and weeding is important to mitigate disease.

Planting early, before virus-carrying insects arrive, or later in the season also reduces diseases and crop defects such as fruit rot and streaking.

Although calabaza are fairly tolerant to disease, no-till crop production has been linked to reduced disease occurrence.

Pests include aphids, pickleworms, cucumber beetles, squash bugs, and squash vine borers. Soil-based pests, such as beetle grubs, wireworms, and other larvae, can damage young plants by depriving the soil of nutrients and feeding on roots.

Squash are most vulnerable to pests as seedlings and during ?owering, and most susceptible to disease after bearing fruit.

Plants produce male and female flowers, which must be pollinated to bear fruit. Pest control should avoid destroying good insects, such as bees. Squash flowers are less attractive sources of pollen and nectar to bees than other flowers, so competing flowering plants should be removed from growing areas.

Storage & Packaging
At maturity, winter squash (and pumpkins) should be cut from the vine and allowed to cure for 2 weeks at warmer temperatures (at least 70°F).

The curing process will reduce weight by about 10 percent due to water loss, but healthy fruit will heal and the skin will harden. Exposure to cold at this stage will damage squash and reduce shelf life.

Caution should be used to prevent rough handling or pressure from packaging, as this will cause bruising. A healthy butternut squash—not exposed to chilling injury—can be stored for 3 to 4 months.
Summer squash should be harvested before full maturity. If necessary, summer squash can last 3 to 4 days at 45 to 50°F and 85 to 90% humidity, but will quickly breakdown afterward.

Calabaza can be harvested mature or immature and typically weigh between 5 and 48 pounds. At temperatures between 80 to 85°F and 90% relative humidity, calabaza squash can be stored for up to 2 weeks.

Longer storage, up to 3 months, is possible with temperatures ranging from 50 to 55°F with 70 to 75% relative humidity.

Squash is divided into fall and/or winter and summer types. Fall and winter squash (and pumpkins) are classified as either U.S. No. 1 or U.S. No. 2. Gourds must be of similar varietal characteristics, not broken or cracked, and free from soft rot or wet breakdown.

For U.S. No. 2, the fruit must be fairly well matured and free from serious damage from the above listed characteristics.

Summer squash is also categorized as U.S. No. 1 and U.S. No. 2, and both require one variety or similar varietal characteristics.

For U.S. No. 1, however, stems or portions of stems must be attached and be fairly young, tender, well formed, and firm, as well as free from decay, breakdown, discoloration, cuts, bruises, scars, dirt, or damage from freezing. Fruit should also be free from foreign material, disease, insects, or mechanical or other injury.

For U.S. No. 2, squash must not be old or tough, but firm, free from decay and breakdown, from damage caused by freezing, and from serious damage caused by discoloration, cuts, bruises, scars, dirt or other foreign material, disease, insects, mechanical or other means.

• Worm holes are scored as a defect when unhealed, or when there are more than 2 holes in a winter squash or pumpkin
• There is no requirement in the U.S. No. 1 grade for a pumpkin to have its stem attached
• Score dry rot as a defect whenever it affects an area of more than 1 inch in diameter (combined or in total) on a 10-pound specimen.