Originating in China thousands of years ago, radishes spread west via Egypt during the time of the pharaohs, then to Greece, Rome, and other European countries. They found their way to North America in the late 1500s.

Radishes are quick-growing and generally require 4 to 10 weeks from seeding to harvest, depending on type. They are most often eaten raw in salads, but are also stir-fried, pickled, or used in soups. Most of the flavor is in the skin and diminishes after peeling. 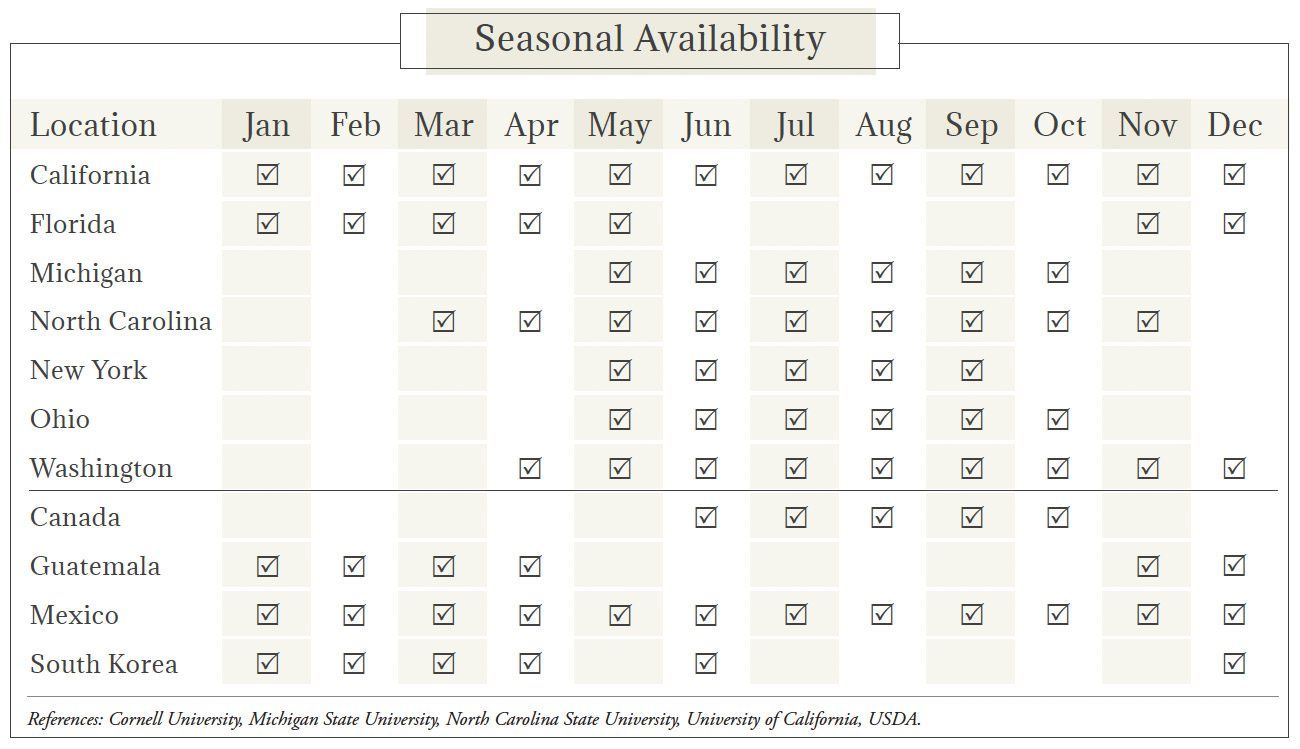 Daikon radishes, also known as Asian or white radishes, are identified by their slender shape and coloring. They come in a range of colors from white, red, or purple to light green and tend to be larger and milder than other radishes.

A daikon heirloom, watermelon radishes (also known as Chinese radishes) have a white, round, edible root. As its name implies, it resembles a watermelon with reddish-pink flesh encircled by a white rim. Varieties include Red Meat, Shinrimei, Roseheart, and Beauty Heart.

Color will deteriorate when grown on the same land for many years; regular crop rotation can also help avoid soilborne pests and diseases.

Rapid growth ensures a mild flavor and crisp texture while slow growth may result in a woody texture and high pungency.

Pests & Diseases
Cabbage maggots can be a serious threat, as they burrow into plant roots. Flea beetles chew small holes in leaves, often rendering them unsaleable.

Sawflies feed on leaves and shoots but can be tempered by an application of bitter melon. Whiteflies range in color despite their name and harm radishes by feeding on plants and spreading disease. Fungus gnats can help reduce fly populations, as well as sticky traps.

Bacterial black spot will develop in storage at warmer temperatures, while black root or black root rot causes misshapen and blackened roots due to bacteria in the soil, and is a serious threat.

Root scurf/wire stem occurs when seedlings are attacked by fungus but survive. If the fungus attacks mature radishes, it is called scurf; symptoms are similar to black root.

Downy mildew occurs at cool, damp weather, causing yellow spots on leaves and a white cottony growth. Mosaic virus causes mottling and stunts growth but can be counteracted if caught early. Infected plants should be removed.

Storage & Packaging
Optimum storage temperature is 32°F and rapid cooling is essential to shelf life. Radishes are often top-iced with 95 to 100% relative humidity.

Common radishes maintain quality for 7 to 14 days with tops, and 21 to 28 days without.

Daikon and watermelon radishes can be stored under the same conditions; daikons will last several weeks and black radishes can be refrigerated for months in perforated bags.

GRADES & GOOD ARRIVAL
Grade standards include U.S. No. 1 and Commercial, providing for two styles of radishes, topped and bunched. Topped means radish tops are clipped back to not more than 0.375 inches in length. “Bunched radishes” have full-length tops, tied in bunches.

INSPECTOR’S INSIGHTS
• When inspecting topped radishes, the sample size is 50-count; if the bag contains less than 50, additional bags must be opened to attain a proper sample
• The tolerance for decay affecting roots is 1%, for the tops of bunched radishes it’s 5%
• Air cracks are scored as a defect if deeper than .25 inches, or the length exceeds 0.625 inches on a 1-inch diameter root
• Any new top growth found on topped radishes exceeding 0.375 inches in length is scored as a defect.