Although plantains are in the same family (Musaceae) as bananas, they are higher in starch and not eaten raw like their sibling fruit.

Plantains are subdivided and classified by inflorescence, or bunch type, according to how flowers or buds appear on the stem, which tie into the maturity of the fruit. Two types dominate the market: French or Horn, each with a number of varieties.

French types, also sometimes called Hembra, include Dwarf (and semi-dwarf), Medium, and Great; Horn varieties include French Horn and are referred to as either False (also called Macho in Central America) or True types. Varieties by growing region include Nendran from India and Dominico from Colombia (both French), and Dominico-Harton (Colombia) and Agbagda (Nigeria), both False Horn varieties. 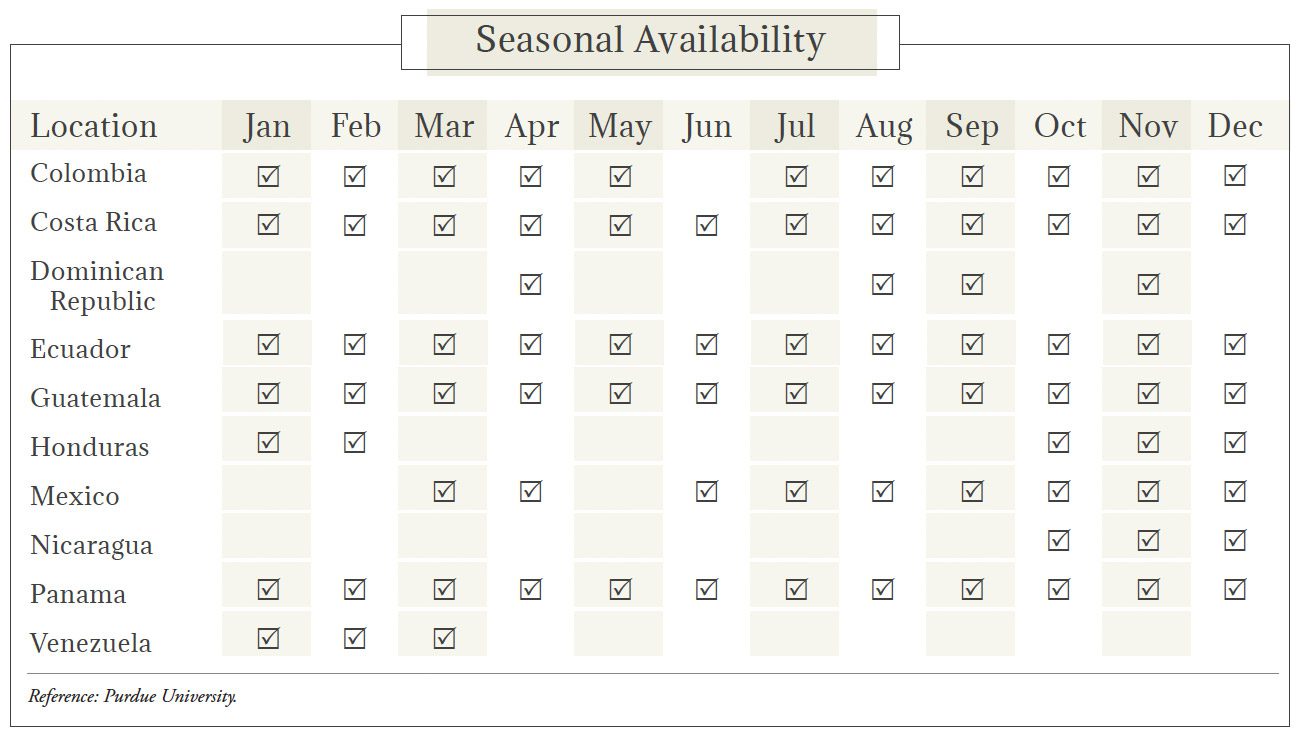 Plantains (Musa paradisiaca) are harvested mature green and may or may not be ripened upon arrival at destination markets, since they are eaten at all stages of ripeness (green through black).

Yellow Sigatoka first appears as a tiny, yellowish-green fleck on a leaves, becomes a long streak, and eventually turns brown or rusty red. The spots soon develop a definite margin surrounded by a yellow halo. The center of the spot collapses and turns grey, but the margin remains a distinctive dark brown or black.

Black Sigatoka’s first symptoms are chlorotic flecks on the undersurface of leaves. Flecks develop into rusty brown streaks and color intensifies to dark red, brown, or black on the upper surfaces. The central tissue in the lesions soon collapses, and the lesions dry, becoming light grey with dark brown or black borders.

Cigar-end rot begins at the tip of the fruit with localized darkening, occasional wrinkling of the skin, and premature ripening. These symptoms can appear one month after flowering begins. Under wet or humid conditions, powdery greyish dust appears on the shriveled black end of the fruit, giving rise to the “burnt tip” appearance of the “cigar end,” from which the disease gets its name.

Storage & Packaging
Store fruit at 45 to 50°F for up to 7 days and 50 to 54°F for longer than 7 days with 90 to 95% relative humidity. Plantains produce ethylene and are sensitive to chilling injury. Symptoms include peel discoloration and abnormal ripening or failure to ripen at all. Variety, maturity, and temperature variations will play a role.

Currently, there are no U.S. or Canadian good arrival guidelines for this commodity.